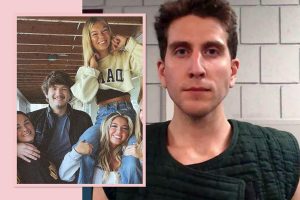 Well, this is an eerie new detail about the suspect in the University of Idaho murders…

As we’ve reported, 28-year-old Bryan Christopher Kohberger was arrested on four counts of first-degree murder and one of felony burglary in Pennsylvania on Friday morning for the murders of Xana Kernodle, Ethan Chapin, Madison Mogen, and Kaylee Goncalves. Information surrounding the arrest is limited, though law enforcement sources told CNN police connected Bryan to the crime after finding his DNA at the crime scene and traced the ownership of the white Hyundai Elantra spotted near the crime scene to the suspect.

We also know Kohberger was a Ph.D. student in the criminology department at Washington State University in Pullman — which is fifteen minutes away from the off-campus residence in Moscow, Idaho, where the four students were found stabbed to death last month.

It’s the criminology studies that have provided the only potential insight into the planning of the murders. In the hours after Kohberger’s arrest, multiple outlets found that months before the victims’ deaths, the suspect apparently asked on Reddit for help from criminals on a school research project — about how they picked their victims and carried out the crimes!

In the since-deleted post, Bryan — under the username Criminology_Student — asked them to conduct an anonymous survey about their experiences, saying:

“Hello, my name is Bryan and I am inviting you to participate in a research project that seeks to understand how emotions and psychological traits influence decision-making when committing a crime. In particular, this study seeks to understand the story behind your most recent criminal offense, with an emphasis on your thoughts and feelings throughout your experience.”

“Did you prepare for the crime before leaving your home?”

“Why did you choose that victim or target over others?”

“What was the first move you made to accomplish your goal?”

“After committing the crime, what were you thinking and feeling?”

He also asked how the ex-convicts would “leave the scene” and if they had an accomplice. In retrospect all these questions seem less like homework and more like asking for advice.

The post noted that the “student investigator” conducting the study was Bryan Kohberger and approved by the “DeSales University IRB.” Since the arrest, the university confirmed Bryan received a bachelor’s degree, saying in a statement on its website:

“On Friday, December 30, DeSales University learned of the arrest of Bryan Kohberger in connection with the murder of four University of Idaho students. Kohberger received a bachelor’s degree in 2020 and completed his graduate studies in June 2022. As a Catholic, Salesian community, we are devastated by this senseless tragedy. Our thoughts and prayers are with the victims’ families during this difficult time.”

Wow… This has all become beyond chilling given that Bryan was just taken into custody for a quadruple homicide. Reactions, Perezcious readers? Let us know in the comments below.