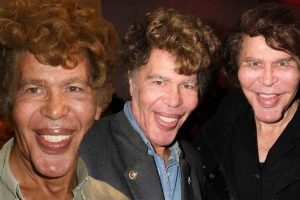 Igor had been experiencing complications with coronavirus, for which he had been admitted to hospital in December.

According to Igor’s close friend and former French Minister of Education Lucas Ferry, the star was in intensive care after contracting COVID-19 in mid-December.

However, his family decided not to disclose the cause of his death.

He was in a Parisian hospital at the time of his death earlier today.

The TV personality’s family announced the tragic news in a statement released just hours after his death.

The message read: “In peace and love, surrounded by his children and his family, Igor Bogdanoff left for the light on Monday, January 3, 2022.”

Grichka died on December 28, after spending several days hospitalised and in a coma.

The Bogdanoff family decided against disclosing the cause of Grichka’s death, too.

The legendary pair rose to fame in the 1980s thanks to their appearance on the science fiction show Temps X on TF1.

Igor is survived by his six children.

Fans of the popular pair took to Twitter to lament the brothers’ deaths.

Igor is survived by his six children.
Fans of the popular pair took to Twitter to lament the brothers’ deaths.
MrMineTronic wrote: “Rip Igor Bogdanoff. Just 6 days after his brother Grichka Bogdanoff passed away.

0xUsamaro added: “Let’s not forget to pay tribute to these two gentlemen.

larwoolf penned: “Very sad news Grishka and Igor Bogdanoff are reunited they both passed away. RIP.

“The twins contributed to the Science fiction with their show #tempsX in the 80’s.”

“The twins couldn’t live without each other.