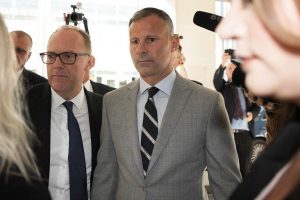 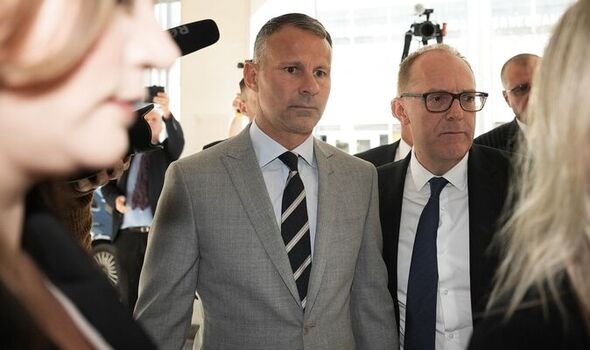 Giggs, 48, denies subjecting his ex Kate Greville, 36, to controlling and coercive behaviour, of headbutting her and assaulting her younger sister Emma during a row. The Manchester United legend and former Wales manager allegedly cheated on Kate with eight women over six years, jurors heard last week.

Emma, 26, said yesterday she witnessed the former Old Trafford star place his hands on her sibling’s shoulders and headbutt her on the lip “with lots of force”.

Emma, who was staying at the couple’s £1.7million mansion in Worsley, Greater Manchester, to look after their puppy Mac while they were out having dinner, claimed Giggs then blamed her for the incident in November 2020.

She told Manchester’s Minshull Street Crown Court that PR executive Kate was planning to leave Giggs but rang Emma on the night of the alleged attack, annoyed that they would be late for dinner as Giggs had been out “all day drinking”.

Later Kate messaged Emma again, saying: “Pack my stuff in the car, we are leaving tonight.”

Kate Greville, her sister Emma said a tussle later took place between Kate and Giggs over her phone after they returned. But the spat escalated.

She told the court: “He put both his hands on Kate’s shoulders and with lots of force used his head to headbutt her in the lip. She fell to the ground screaming and covering her face.

Emma told jurors Kate was “visibly upset” on returning from the restaurant and could see she had been drinking but was “not stumbling”.

Prosecutor Peter Wright QC asked her: “Did she explain anything to you about the reason for her being upset?” Emma replied: “She just told me she confronted him about cheating but didn’t go into detail. We wanted to get out of the house.”

She said Giggs arrived about 15 to 20 minutes later and his mood was “not happy” and he “was very drunk”.

Emma said she retreated into a bedroom before going back downstairs and saw her sister Kate hugging Mac the puppy in the hallway.

She told the court: “Ryan said, ‘Say your goodbyes to the dog, you will never see him again’. It was in a snide manner, that he had the power – that he could keep the dog when he knew the dog was Kate’s. He said we were not allowed to take the dog with us.”

Emma said Giggs accused Kate of taking his phone, which her sister denied before he put her belongings in the hallway, including a handbag with her phone on top.

Emma said: “Ryan turned to Kate and said, ‘If I don’t have my phone, you are not having yours’.

“Kate grabbed it before he did and they were in physical contact with each other.”

Emma said she left to check on the dog and, on returning, saw Giggs’ legs sticking out into the hallway. She added: “I could hear her shouting, arguing and scuffling. Kate was lying on her back and Ryan was on top of her. Ryan was trying to grab Kate’s phone.

“From her facial expressions I could tell she was in pain. Kate said ‘get him off me’ so I put both my arms around his waist and, as Kate was using her legs to push him off, I was pulling. As I was pulling him up he turned to his right and his elbow touched my jaw.”

Emma said she was “upset”, felt “shock” and called her parents for help while Kate tried to retrieve her phone from Giggs’ back pocket.

“Kate said to Ryan, ‘See, I have proof’. He had gone from annoyed to extremely angry.” The trial continues.