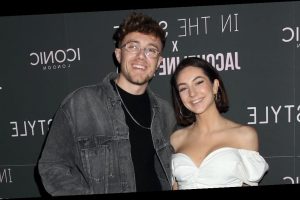 I’m A Celeb star Roman Kemp and his girlfriend Anne-Sophie Flury have reportedly split after a three year relationship.

The couple moved in together in January but according to The Sun, their relationship broke down during lockdown.

A source told The Sun: “Roman loved Sophie and things had been going really well for them. But being in lockdown is tough for any couple and they just weren’t able to make things work, which has been upsetting and tough for them both.

“His pals have encouraged him to move on and have got him on [dating app] Raya, which is packed with attractive and creative women.”

The source also added that Capital Breakfast host Roman has made a nod to his father Martin's band, Spandau Ballet, on his profile.

They added: “He’s set up a profile with his best photos and has set the music on his page to the song Gold, by his dad’s band. He’s having fun with it.”

The couple owned a pet dog together called Luna, who Anne-Sophie is believed to have kept in the split.

On 7 January the pair moved in together, with Roman sharing a snap of the pair in their new home as he proudly held up a set of keys.

He captioned the snap: “WE DID IT. Moved into our dream place today and I can’t quite believe it , big love to @billyhayes_investandco for helping me do this and sell my last place… and big love to mumzy who drove/carried/carted half the boxes with me.” [sic]

During his time in the Australian jungle, Roman was very popular among the female viewers, but he regularly gushed over his long-term love, Anne-Sophie.

The radio host grew emotional after he received a letter from Anne-Sophie, which read: “I miss you so much, it's ridiculous.”

It continued: "It's made me realise just how much I love sharing the boring, everyday aspects of life with you."

"All the silly conversations we have and laughing together at things that probably aren't even that funny. I am so excited to have those moments back. Keep doing me proud and keep being wonderful. All my love."

A crying Roman later told viewers in the camp's Bush Telegraph: "That letter was one of the best moments I’ve ever had in my life and one that I’ll never forget."