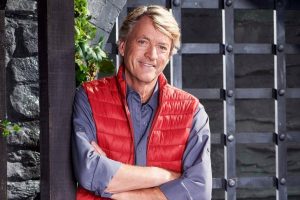 I’m a Celebrity… Get Me Out of Here fans have been swooning over Richard Madeley in newly-shared throwback snaps.

The Good Morning Britain presenter is currently in Gwrych Castle in North Wales for the hit ITV series, while his team have taken over his Instagram account and posted the retro pictures.

In the new photos, the now-65 year old can be seen with brown shoulder length hair, as the young journalist showcases his tall stature in blue denim flares and heeled boots – showing off the retro style worn at the time the snaps were taken.

The first throwback snap was captioned with: “Lots of lovely comments about how well Richard is looking in the castle, but do you think he could still rock a pair of flares?”

Fans were left swooning over the retro shots and said the presenter looks “handsome” and is the “true stud of the castle“ instead of Danny Miller's and the fan favourite heartthrob, David Ginola.

One supporter commented: “Move over @davidginolaofficial you’re not a patch on our Richard!”

Author and journalist, Bryony Gordon, simply wrote: “What a LEGEND.”

His followers were also quick to point out that he “obviously” rocks the flared jeans, too. The outfit post was followed by another throwback of a close up of young Richard with a bronzed tan and big grin.

His team penned in the caption: “When you spot your harmonious chorus of joy coming towards your table from the kitchen.”

The post was referring to the delicious-looking Victoria sponge that Richard and his campmate Dame Arlene Phillips won in their daily challenge against rival campmates Louise Minchin and Matty Lee.

Richard has not only won food, but fans' hearts with the relaxed posts as the comments were filled with fire emojis and praise for the presenter from avid I’m a Celeb viewers.

Some admitted they watched the show solely for Richard, too as one penned: “Absolutely love him!!! Tuning in just for him!”

While, one poetic person added: “My eyes are joining into a harmonious chorus of joy”.

Richard is currently residing in the Castle Clink below the main camp with Dame Arlene Phillips, David Ginola, Danny Miller and Naughty Boy.

Stay up to date with all the latest on Richard Madeley by signing up to OK!'s daily celebrity newsletter .