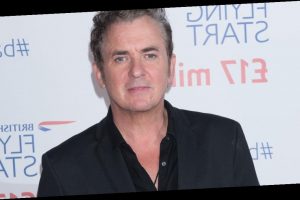 Former EastEnders star Shane, 56, shared a number of stories of his previous saucy encounters during his time at Pontins Holiday Park.

Shane, who recently shared hopes to return to EastEnders someday, worked as a bluecoat at the holiday park in the Isle of Wight aged 16 and claimed he bedded many women during his time there.

Soap star Shane also revealed how he was just 12 when he lost his virginity, as he opened up on his sex life in his 2004 autobiography Rags to Richie: The Story So Far.

He claimed he could bed a different girl every night if he wanted to and said: “It wasn’t a thousand, but it could have been.”

He said: “One week in July a group of six girls came down from Chelmsford they called themselves the Sexy Six and they were all blonde.

“They invited me to a club. I said I'd bring some mates along, but they told me I should come on my own.”

Shane revealed he went with the group and was offered “what he says he presumed was speed”.

Actor Shane “thought it was meant to make you high” but he said he felt “extremely randy” after taking it, instead.

He then explained how, after he went back to the group’s holiday chalet, he ended up alone in bed with one girl he’d been eyeing up all night before another girl joined them.

Shane, who is now married to Christine Goddard, said he was kissing them both until he was told by one of the girls that some of their friends waned to join in, he revealed in the book.

He then stepped into the other room to find the other girls completely naked and “smoking a joint and drinking wine”.

Shane, who recently said the pandemic has left him “literally skint”, claimed he was “passed around from girl to girl” during the naughty encounter. But, he admitted it “stopped being a turn-on when there were six” as “there was no way he was going to please them”.

He then revealed how the girls fell asleep and left him alone with just one of the girls.

The actor said he was fulfilled on the night but felt “used and abused” the next day.