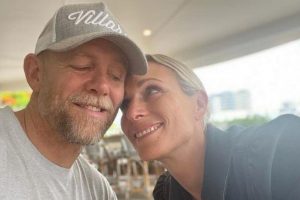 I'm A Celebrity… Get Me Out Of Here! evictee Mike Tindall l has shared a loved-up selfie with wife Zara after the pair reunite following his exit from the jungle.

The former rugby champ turned royal became the latest celebrity to be evicted from the jungle in Saturday night's penultimate episode, being voted out just hours before the final.

Following his exit from camp, Mike, 44, took to Instagram to share a sweet selfie with his wife, as the pair went out for coffee with one another.

Sharing the sweet snap, Mike penned the caption: "Reunited!!! [red heart emoji] Back to normality and time to eat!!! Thanks for all the kind messages! It was a blast! #imaceleb #familytime."

Following their reunion, the down-to-earth royals donned casual outfits as they visited Bumbles Cafe, and Mike showed off some of the food he's treated himself too since leaving the jungle.

After his eviction was announced, Mike spoke to presenters Ant and Dec about his time on the show, which he described as an "amazing journey."

As the exit interview came to a close the presenters said: "Zara is waiting for you so all that is left for us to say is Mike Tindall you are a celebrity, get yourself out of here!"

Mike then made his way over the iconic bridge as Zara, who is the daughter of Princess Anne, sweetly ran to greet him with the two sharing a sweet hug.

The happy couple later arrived at the JW Marriott hotel, with the pair hugging and beaming for the cameras.

Mike held his hands high to celebrate as he entered the hotel, before being greeted by his former campmate, and could be seen chatting to Seann Walsh, Sue Cleaver, Charlene White and others.

It's unclear if the royal couple will stay in the hotel along with the other contestants.

With Mike's eviction, the final three celebrities in the jungle were revealed as Matt Hancock, Jill Scott, and Owen Warner.

The I'm A Celeb 2022 final will air tonight (November 27) at 9pm and air until 10.40pm. And in a jungle first, the campmates will be asked to take on their final Bushtucker Trials facing one another.

Show execs have come up with the idea to add extra jeopardy to the final three trials of the series and it will be the first time it has happened.

According to OddsChecker, footballer Jill is still the bookies' favourite to win, currently being priced at 1/4. Whille former Health Secretary Matt is second favourite at 6/1, with Hollyoaks star Owen considered the outsider at 12/1.