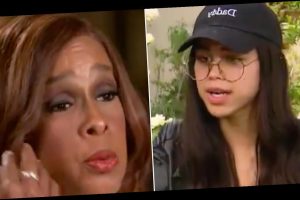 Just hours before she was arrested, Miya Ponsetto — who has earned the not-so-flattering nickname SoHo Karen — appeared alongside CBS This Morning host Gayle King for a virtual interview.

Back on December 26, People reports, Ponsetto was caught on camera approaching a Black teen, the son of Keyon Harrold, at the Arlo Hotel in New York City. She accused the teen of stealing her cell phone in what's being called a case of racial profiling and harassment. As King recounted the facts this morning, Ponsetto snapped "Enough!" and gestured defiantly — and proceeded to get called out on Twitter. The 22-year-old woman was compared to a petulant teenager and, well, much worse. It was supposed to be a story of redemption. Instead, Ponsetto told King, "I admit, I could have approached the situation differently, or maybe not yelled at him like that or made him feel … inferior, or like I was hurting his feelings" and then proceeded to yell at her, saying, "I don't feel that is who I am; I don't feel this one mistake defines me."

When King mentioned that Ponsetto's alleged actions were, in fact, wrong, she snapped: "OK, so basically I'm a 22-year-old girl. Racism, uh, is … how is one girl accusing a guy about a phone a crime?" eventually adding, "alright Gayle, enough!"

Twitter users (who managed to get daddy trending because of Ponsetto's hat) were appalled at her actions, pointing out that it was just another instance of her privilege.

In a statement to CBS This Morning, the teen's parents clarified that SoHo Karen didn't actually apologize during the interview.

"This is not about an apology from someone who, until a few days ago, was claiming she did nothing wrong, and in fact alleged Keyon Harrold Sr. had assaulted her," a statement from the family reads. "Someone who targeted a 14-year-old Black child because of the color of his skin."

Ponsetto was arrested Thursday in California on a fugitive warrant, NBC News reports.