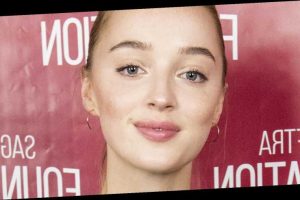 For all of the Bridgerton fans who had been holding out hope that Phoebe Dynevor would find love with her co-star Regé-Jean Page, this one is definitely going to sting. Dynevor has been linked to Pete Davidson, according to the Daily Mail. As Dynevor gears up to film Season 2 of the hit Netflix show, she has been traveling to New York to see the “King of Staten Island” himself. As reports would have it, Dynevor has “grown close” to Davidson, ex-boyfriend of Ariana Grande, Kate Beckinsale, and fling of one insanely hot super model, Kaia Gerber (via People).

Details about Dynevor and Davidson’s rumored new romance have been sparse at best, but there have been several accounts of people saying that they saw the two together, either in New York or across the pond. In early February 2021, Dynevor shared a few photos to Instagram when she was in the Big Apple, specifically in Brooklyn, with the caption “grateful I got to be here for a hot sec.” She added a red heart emoji to the post, which could have symbolized her love for New York. Or, perhaps, it symbolized her rumored new love interest? According to the Daily Mail, she was in town to film, but there are rumors that she also spent time with Davidson during that trip.

Pete Davidson and Phoebe Dynevor are rumored to have met up again in Dynevor’s hometown in England, according to Page Six. Dynevor lives in Altrincham, where she has been staying with a friend throughout the pandemic, according to the report. Someone on Facebook shared some info about seeing Davidson there, calling it “bizarre.”

“Bizarre Altrincham spot of the day … he’s staying over in Altrincham with friends,” the Facebook user posted (via Page Six). And, in the Daily Mail‘s report, someone else on Facebook actually shared a photo of Davidson in Altrincham. In the snap, Davidson was “wearing sunglasses and a black face covering as he posed with two fans.” Neither Dynevor nor Davidson have spoken out about the rumors, nor have they been officially photographed together but, if the rumors are true, that’s bound to happen sometime soon. For now, the actors seem to be keeping things on the down low the best they can.