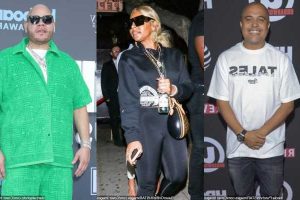 The Murder Inc. founder insists that while he has gotten over the ‘Happy’ hitmaker, he still hasn’t forgiven her for allegedly betraying him when he was arrested for money laundering back in 2005.

AceShowbiz –Irv Gotti apparently still has a lot to say about his past relationship with Ashanti despite backlash. In a new interview, the Murder Inc. founder insists that while he has gotten over the “Foolish” hitmaker, he still hasn’t forgiven her for allegedly betraying him when he was arrested back in 2005.

At the time, Irv was arrested for laundering money for Kenneth “Supreme” McGriff of the legendary Supreme Team. Recalling the incident, Irv revealed to Page Six, “When the feds hit, [Ashanti] ran like the cockroaches when you turn the lights on.”

He continued, “She was ready to get the f**k off of the Murder Inc. label and she was ready to abandon me, the person who made her. And yes I can say I made her. How do you know I can say that firmly? The minute I stop making her records . . . She has not made a hit since.”

Ashanti was signed to Murder Inc. in 2002. Her self-titled debut album, which was under the record label, sold over 505,000 copies in the U.S. in its first week of release. She later moved onto Def Jam before kicking off her acting career. As for her romance life, Ashanti dated Nelly for 11 years following her split from Irv.

In related news, Irv discussed his relationship with Fat Joe after the latter criticized him over his comments on Ashanti during his appearance on “Drink Champs”. While stopping by Houston’s 97.9 “The Box”, Irv insinuated that Joe is no longer his friend following the jab.

“I feel like [Fat Joe] fooled me. He’s not my friend. I was fooled, but in life you get fooled,” Irv told the hosts. After one of his team members tried to steer away from the topic, Irv added, “Forget Joe ’cause they don’t want me to talk about Joe. So I won’t talk about Joe, I’ll talk about life. And In life, everyone goes through friends.”

“People who you thought were your friends-I’m not talking about Joe. Let me talk. In life, I’ve had countless friends come and go, but, you know what remains consistent and why I get through all of this? My family, ’cause I don’t really need friends … I’m more than content going home and spending time with my mom. Like, I’m a weird dude like that,” he went on to say.

He continued, “People may be jealous of you, on the low. I just signed a deal for $300 million. I know certain people who are friends – so-called friends – they may be mad at that … And that’s cool. We don’t need to be friends anymore. I don’t need any new friends or old friends who pretended to be my friend. They revealed themselves.”