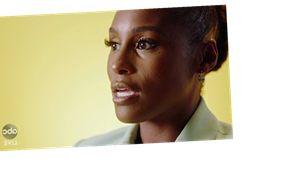 Issa Rae is sharing her truth! During a special story moment title “My First TV Show Pitch” at the 2020 Emmy Awards, the 35-year-old Insecure creator and actor opened up about how she’s managed to stay honest to her brand and storytelling while working in Hollywood.

“My first Hollywood picture was kind of unofficial. Basically I have this web series. It was the third I had ever made,” she began, detailing her popular web series The Misadventures of Awkward Black Girl. “The executive was like, ‘Yes, I saw your show. Funny stuff.’ Funny stuff? I was like, um, thank you.”

She went on to share that the executive didn’t exactly understand her work.

“He was like, ‘Yes, it’s about this Black woman and her Black woman problems. Hilarious.’ I was like, that’s not what it’s about, but okay. He was like, ‘The Black audience wants to see familiar faces. So you might need to switch up the characters,'” she recalled. “And remind you, he’s this executive who is not Black telling me what Black people like.”

Although the pitch wasn’t received exactly as planned, Rae said she used that moment as motivation to fuel what is now HBO’s Insecure. “It just became very clear to me that he didn’t get the show. And I remember just fuming in that meeting, like, why does he get to tell me what gets to be on TV? Why does he get to tell me what people like me like to see? When I’m here, I’m telling you what I want to see. I made it!”

“For me, that moment was the motivation I needed to keep doing what I was doing…to kind of bet on myself,” she concluded. “That fueled me. Like, okay, I’ll show you.”

“And, you know, one of us got fired after at,” she added with a laugh.

END_OF_DOCUMENT_TOKEN_TO_BE_REPLACED

END_OF_DOCUMENT_TOKEN_TO_BE_REPLACED
We and our partners use cookies on this site to improve our service, perform analytics, personalize advertising, measure advertising performance, and remember website preferences.Ok