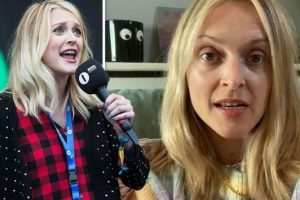 Radio DJ and TV personality Fearne Cotton, 39, has claimed that she “had to walk away” from her presenting role on BBC Radio 1, as it was “ruining her mind”. The blonde beauty spent 10 years fronting the station’s mid-morning show before deciding to leave in 2005 when she was pregnant with her second child.

The radio DJ, who currently has a show on BBC Radio 2, has previously spoken about her mental health and bravely admitted that depression affected her “work confidence” while presenting her radio show.

But now, Fearne has claimed that her 10 year presenting role was “ruining” her mental health, leading to her decision to leave the show.

Addressing her time at the radio broadcaster, she said: “I had to walk away because it was literally ruining my mind…..

“A lot of people still believe in this myth that people on TV or social media are these perfect people with perfect lives, and, of course, it’s all a load of b*****ks,” she told Red Magazine.

Speaking to Angela Scanlon on her Thanks A Million podcast earlier this year, the mother-of-two told how she felt “isolated” when her mental health was suffering.

Fearne said: “A lot of my work has come from that area of my life where I fell into a pretty big hole of depression and not much around me seemed to make sense.

“I felt very isolated and very alone in my experience. It was long before I even dared use the word depression…”

She went on to reveal that she was still working on a few things which have affected her and recently looked back at how it affected her career.

She explained: “One of them is confidence, because I totally lost it when I didn’t have any at all, which has really hindered me in my work life and somewhat in my personal life…

“My working life, I really lost confidence… I literally couldn’t put myself out there in the way that I used to.”

The wife of musician Jesse Wood started off presenting the show in 2005 with Reggie Yates, whom she had previously worked with on CBBC.

She then went on to sit in for Zoe Ball on Radio 2 before hosting her Sound of the 90s show.

Fearne was also a team captain on Celebrity Juice from 2008 – 2018 alongside This Morning presenter Holly Willoughby.

In May 2015, Fearne presented her last show at BBC Radio 1 with the help of a few famous faces, including Ed Sheeran, Sam Smith, Foo Fighters and Coldplay.

Marking the occasion, Coldplay frontman Chris Martin wrote a special song, Gone But Not F Cotton, singing: “I was very, very sad to hear my favourite show would disappear. Have to tell her thanks for the records she played, thanks for introducing us to Lana Del Rey.”

Irish rockers Kodaline played a different version of their song The One, with the lyrics: “The BBC will never be the same, we’re going to miss you when you’re gone. We hope the goldfish that we gave you is still alive and swimming on.”

The radio presenter stepped down after 10 years at the helm of the station’s mid-morning show for “family and new adventures”, after revealing she was pregnant with her second baby in February.

She said: “This is honestly the weirdest day ever.

Read the full interview with Fearne Cotton in the September issue of Red on sale the 5th of August. It is available in all supermarkets and online at MagsDirect