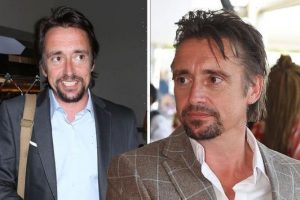 The Grand Tour: Official trailer for Carnage A Trois

Richard Hammond, 51, has opened up with his thoughts on the carbon emissions associated with keeping classic cars. The star was chatting to Express.co.uk and other media when he made the comments as the latest episode of The Grand Tour returns.

Speaking ahead of the new outing, the presenter was quizzed about how some people change their cars because they don’t like their colour.

Richard shared his thoughts on this, as well as car carbon footprints.

He explained: “Well, it’s very much an argument for that at the moment, isn’t there? In terms of the car’s carbon footprints.

“There was some work done by a guy called Henry Pearman who showed that with a lot of classic cars, because their carbon footprint is so old and if you’re keeping your car for 10, 20 years, that’s 10, 20 years of which to [overcome] the impact in terms of carbon where the bulk of it happens during manufacturing.

“So it’s kind of, very green that we should be doing it, it’s a good idea to use these things.”

He added: “If you’re doing minimal mileage, keeping an internal combustion engine car going for 20 years rather than replacing an electric car every two or three years it’s probably, I don’t know, but probably a greener thing to do.

“There are plenty of arguments for it being a greener alternative to use it up and wear them out.”

Richard runs his own classic car workshop and even recently announced a Discovery+ series all about this.

He launched the business earlier this year, teaming up with restoration experts.

The latest episode of The Grand Tour is set to launch later this month on December 17.

The outing, filmed in England and Wales, sees the trio of presenters looking into French cars.

Richard also opened up about working with his co-stars Jeremy Clarkson and James May on the latest episode.

The pair have been working together since the early 2000s when Richard first landed the gig filming Top Gear.

Speaking about their dynamic, he said: “There’s always a moment, a first moment on any of these trips, when the cameras are set up, directors call to action, and it’s like we’re stepping back into a world that’s been there all the time.

“But we’ve not been away from it.

“It just immediately picks up because we’ve worked together in so many different circumstances.

“And we’ve done live shows together and we spent a lot of time together.”

He added: “You kind of know what each other is going to say.

“I know if something happens and I throw in a line and kind of can anticipate where they’ll go with it, and vice versa.

“It’s great because it means it’s a strength and we can work together more easily.”

The Grand Tour returns to Amazon Prime Video on December 17.