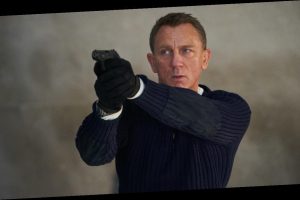 The title No Time to Die is starting to be a bit ironic.

The 25th entry in the Bond franchise — and final starring Daniel Craig as 007 — has been redated yet again due to the ongoing coronavirus pandemic, moving from April 2 to its new release date: Oct. 8, 2021.

This marks the film’s second release date this year. When it was bumped from Nov. 20, 2020 into 2021, the studio said it was “in order to be seen by a worldwide theatrical audience.” “We understand the delay will be disappointing to our fans,” the statement said.

MGM, Universal and Bond producers, Michael G. Wilson and Barbara Broccoli, today announced the release of NO TIME TO DIE, the 25th film in the James Bond series, will be delayed until 2 April 2021 in order to be seen by a worldwide theatrical audience. pic.twitter.com/NqHlU24Ho3

The latest release date is a year and a half removed from when the movie was originally set to debut in April 2020. In March, No Time to Die was one of the first tentpoles to push its release, aiming for a late November release. (Both Skyfall and Spectre had previously opened in November.) Now, with movie theaters only reopened it certain markets, the studio is pushing it out of 2020 altogether.

In addition to Craig, No Time to Die will mark the return of Ben Whishaw’s Q, Naomie Harris’ Eve Moneypenny and Ralph Fiennes’ M. Captain Marvel‘s Lashana Lynch, meanwhile, plays a new double-0, with Ana de Armas joining the cast as a CIA agent and potential Bond girl and Rami Malek as the villain.