James Holzhauer Called Out a “Horrifying” Tweet and 'Jeopardy!' Fans Lost It 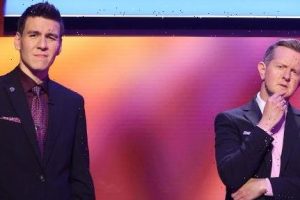 There’s a reason Jeopardy! legends Ken Jennings and James Holzhauer get along so well. Apart from once sharing the stage with Alex Trebek and now cohosting their own quiz show, The Chase, the two TV personalities also have the same sense of humor. That said, when a joke doesn’t land, James will be the first to call it out (we’ve seen this before), and Ken is usually right there behind him.

Alarmingly, I thought yours said “spreading” and not “spending” at first glance.

After spotting his punny Valentine’s Day card — which said, “Spending my Holz-hauers with you” — James felt compelled to share his candid feelings about it. “This is genuinely horrifying,” he wrote in a retweet.

Unsurprisingly, when James shared his thoughts on Twitter, Ken saw it and within minutes admitted that he had to do a double take. “Alarmingly, I thought yours said ‘spreading’ and not ‘spending’ at first glance,” the Jeopardy! cohost tweeted back.

Over on the Jeopardy! fan’s Twitter account, they followed up their original batch of cards with additional ones for Jeopardy! stars Buzzy Cohen and Amy Schneider. In the end, the fan clarified that it was all just for fun. “Btw this is all just a joke 😂,” they tweeted. What’s more, they also loved the response from the Jeopardy! legends. “Ken and James, I am honoured,” the fan wrote.

The rest of the Jeopardy! fandom enjoyed watching everything unfold. “Winning the internet today for sure!” one person wrote. “I don’t know how I missed this but these cards are great 🙌,” a different follower said.

So, what does James and Ken’s ideal Valentine’s Day greeting card look like anyway? That we don’t know but Ken did reveal that his plans for the holiday include watching the trivia show with great company. “It’s not Valentine’s Day if you’re not curled up in front of a warm fire, listening to Johnny Gilbert with that special someone,” he wrote.