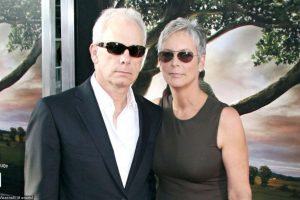 During a recent interview, the ‘Halloween Kills’ actress additionally opens up about the real reason why she never used her middle name until she was launching her career .

The “Halloween Kills” actress never used to like her moniker because other children poked fun at her for having a boy’s name – so she asked her parents, late Hollywood stars Tony Curtis and Janet Leigh, to modify it.

Although the name change never stuck, the 62-year-old star admits her husband, Christopher Guest, can’t resist reminding her of her short-lived alternative identity when they’re enjoying “moments of great intimacy.”

She says, “For about a week, my family – I told them, ‘I want you to call me Janie, so for like a week, my parents are like, ‘Whatever.’ They would say ‘Janie,’ which didn’t last very long. My husband will – in moments of great intimacy, when you are not trying to laugh, if you know what I mean – when you are going for something else, Christopher will look at me and say, ‘Oh, Janie,’ ” which would make her crack up.

Jamie adds she never used her middle name until she was launching her career because it would have felt “pretentious” to do so.

Asked if she ever just went by Jamie Curtis during an appearance on “The Late Late Show with James Corden“, she explains, “Oh, yes – many, many, many, many times. That was who I was until I became an actor. I would never have called myself a three-name person. That felt a little pretentious.”

Jamie and Christopher have been married for 36 years and share two children together. Back in 2018, the actress shared the secret to her long-lasting marriage.

“Don’t leave,” she told Good Housekeeping. “There’s a recovery phrase that says, ‘Stay on the bus…the scenery will change.’ You think you’re having a bad week, but stay on the bus, because one of these days you’ll look out the window and it’ll be beautiful. I think it can apply to almost anything where you feel unhappy in that moment. I’m not a wild romantic. I’m a realist. I respect him. And I just don’t leave.”