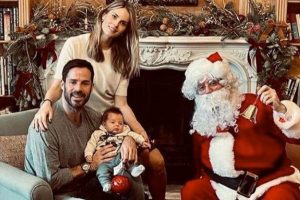 Jamie Redknapp has shared a collection of heartwarming pictures with his baby son Raphael, who his new wife Frida Andersson gave birth to last month.

Taking to Instagram, the former footballer, 48, gave a glimpse into Raphael's first Christmas as he was joined by wife Frida, his parents Harry and Sandra Redknapp, and his two sons Charley, 17, and Beau, 13, who he shares with ex-wife Louise Redknapp.

Jamie penned: "Happy Christmas from the Redknapp’s [heart emoji]. Hope you had the best day with your families."

In the pictures, it sees Jamie and Frida posing with Raphael and Father Christmas for an adorable snap.

While other snaps include the family at their dining table and son Charley holding his baby brother Raphael.

He captioned the picture with: "When Harry met Raphael."

Jamie announced Raphael's birth in November, writing at the time: "Meet Raphael Anders Redknapp, we’re so in love, mum is doing so well too. We can’t thank the amazing doctors and nurses at the Chelsea and Westminster enough. So excited for him to meet my boys."

In regards to Frida and Jamie’s son’s unique name, apparently the pair wanted his name to reflect his Swedish heritage.

An insider told The Sun: "Jamie and Frida wanted to give him a Swedish name too, and Frida loved her late grandfather Anders so they named him after him."

Frida also gave a nod to her Swedish ancestry when announcing Raphael’s arrival, where she referred to the newborn as their “viking”.

As well as Jamie expressing his excitement of Raphael meeting Charley and Beau, hegushed over the moment his baby son met his mum, Sandra, and his brother, Mark, for the first time .

In the wake of Raphael’s birth, it was reported that Jamie’s ex Louise was “in despair”, but the singer later shut down these claims and insisted that she’s in “the most positive headspace”.

For updates on all your favourite celebs, sign up to our daily newsletter here .