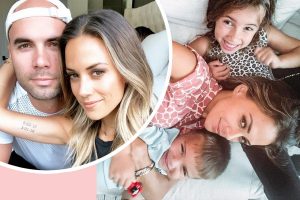 In case you were wondering, yeah, Jana Kramer heard the news about her ex’s new lady.

Mike Caussin was photographed over the weekend at the beach with an unidentified woman (you can see the pics on the @CocktailsAndGossip Instagram account HERE) leading many to infer he was moving on after the divorce. Of course, from everything we’ve heard, he was pretty consistently moving on with new women throughout his marriage, but you know what we mean.

The Whine Down podcast host clearly got wind of the pics because she subtweeted the mystery woman taking a chance with Caussin, writing wryly on Sunday night:

But don’t expect Jana to spend too much time fretting over whatever new relationship the former NFL player is diving into each week. A source told E! News the 37-year-old was trying to focus on being a good parent:

“Jana has been making the kids her priority and their health and happiness will always be her focus. Being a good mother comes first and she will always do what’s best for them.”

Hmm. TBH, even this totally reasonable insider statement comes across a little shady, considering the kids in question are 5-year-old Jolie and 2-year-old Jace — you know, the ones she shares with Mike.

Recently Jana herself sparked rumors of moving on, with Bachelorette alum Graham Bunn. She, however, insisted they were friends, though as she put it, “dancing the line of friends” — a statement she later walked back, saying she wasn’t yet in that place.

Around the same time the Why Ya Wanna singer seemed to shade her ex for not being much of a co-parent. Between that and highlighting her focus on the kids while he’s out with another woman we’re definitely getting the sense she doesn’t think he’s much of a family man after all.

The One Tree Hill alum has, however, more recently stated she regrets some of the trash she’s talked about Mike in the days since the divorce. She told Maria Menounos on her podcast a couple weeks back:

“It’s one of those things where there are so many things I wish I could take back and when it’s already out there, press has picked it up or you’re like ‘Ah I wish I would have not said it like that!’ There’s a lot of things I really regret saying…”

This new shady response may just be Jana’s version of not being able to say anything nice — and therefore not saying anything at all!

What do YOU think of her response to Mike movin’ on??