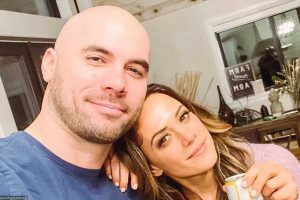 In the petition filed, the ‘Why Ya Wanna’ hitmaker accuses her estranged husband of ‘adultery’ in addition to ‘inappropriate marital conduct’ and ‘irreconcilable differences.’

AceShowbiz –Jana Kramer is holding nothing back in her divorce from Mike Caussin. Having been hit with speculations that she had enough of her estranged husband’s infidelity, the “I Got the Boy” singer was reported to have mentioned his “adultery” in the divorce papers she filed.

Less than a week after the former “One Tree Hill” star announced her separation from her husband of six years, E! News obtained the divorce documents she submitted. In it, the actress/singer allegedly listed her reasons to end their marriage as “inappropriate marital conduct, irreconcilable differences and adultery.”

Aside from offering the bombshell reasons, the “Dancing with the Stars” alum also entered a post-nuptial agreement in the divorce documents. She additionally mentioned her wish for the two of them to share custody of their two children, 5-year-old Jolie Rae and 2-year-old Jace Joseph.

Furthermore, Jana was said to have demanded Mike to pay alimony and cover the cost of her legal fees. The date of their separation was listed as Tuesday, April 20, which was one day before she made public her decision to pull the plug on their relationship.

On April 21, Jana shared with her fans and followers that she and Mike had called it quits. “I’ve fought y’all. I’ve loved hard. I’ve forgiven. I’ve put the work in. I’ve given everything I have, and now I have nothing else to give,” she stated in a lengthy Instagram post.

Stressing that it’s time for her to take such decision, Jana added in the same post, “Please know that I still believe whole heartedly in marriage, love, and rebuilding. I just can’t fight any longer. It’s time to heal. I’ll always encourage you to continue the good fight, but you can’t fight it alone.”

While her post didn’t reveal further about the split, a source at the time told POPLE, “[Mike] cheated and broke her trust again. After fighting for the marriage for so long, she’s come to terms with the realization that his patterns were never going to change.” The source added, “The focus now is on their kids.”

Jana and Mike split in 2016 due to infidelity. The two, however, managed to work out on the issues and reconciled. In March 2019, they got candid about his sex addiction. During an episode of their podcast “Whine Down with Jana Kramer and Mike Caussin”, he claimed to be “in the 12-step program of sex addiction” for almost three years and was “approaching a year [of] sobriety next week.”

“I spent essentially 29 whole years thinking or living a different way and then all of a sudden you shock your system, you say no, you’re actually supposed to think of things this way,” Mike said at that time. “For people just to flip the switch immediately, that’s few and far between.”