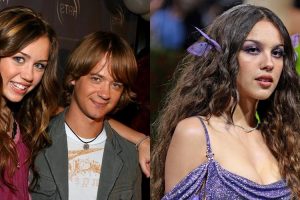 Jason Earles has had a front row seat two stars have their careers go big!

The actor first experienced it with Miley Cyrus when starring on Hannah Montana together, and more recently with Olivia Rodrigo.

Jason worked as an acting coach on the first two seasons of High School Musical: The Musical: The Series, and in the third season he joined the cast as a recurring guest star.

In a new interview, he opened up about being so close to watching both of them become big pop stars.

For me, what has been mind-blowing is I was there during Hannah Montana, and I watched Miley turn into the biggest pop star in the world overnight,” he told People. “The show premiered, we told them, ‘She’s a pop star,’ [and] suddenly, she was a pop star.”

“And then Olivia Rodrigo, when ‘drivers license’ dropped, the world just decided that she was the biggest pop star on the planet,” Jason added. “It happened so quickly. It was so shockingly similar to Miley’s rise that I was like, ‘How can I possibly be this close to this twice in one lifetime?’ It’s just fascinating to see in the front row as it goes down.”

Could Hannah Montana ever come back??