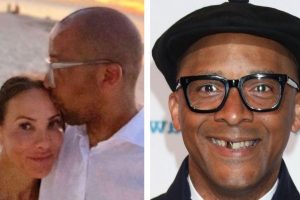 Jay Blades talks about the new season of The Repair Shop

The Repair Shop star Jay Blades announced his engagement to fiancée Lisa-Marie Zhozen over the Christmas season last year, and he presented her with a ring made by one of his co-workers on his BBC show. It seemed the ultimate romantic gesture – and Jay’s co-worker Richard played a helping hand in upgrading the relationship, which had raised Jay out of a deep depression.

The state that I was in, I would have taken my own life, and I came close

A delighted Jay had tagged his The Repair Shop co-worker Richard Talman in Instagram posts, flaunting the stunning ring he has given her.

“Ring designed by me & made by @rtf,” he wrote alongside the image.

Meanwhile, Richard shared in their joy by dedicating his own social media post to their union.

“It was a real honour to make this engagement ring for another one of my #repairshop family! Congratulations to Lisa @lisamariezbozen & Jay @jaybladesmbe on your engagement!,” he exclaimed proudly.

Jay was congratulated publicly by Leigh-Anne Pinnock, the Little Mix star he once mentored as part of his furniture business, and pal Louise Minchin.

His relationship helped him enormously after a period of time during which he had hit “rock bottom”.

The 51-year-old had suffered a string of hardships throughout his life, from living on a rat-infested council estate in poverty after his father abandoned the family when he was a baby, to becoming homeless at 21 and having nothing more than a single carrier bag of possessions to his name.

However, in spite of his success on The Repair Shop, Jay revealed he found himself “homeless” yet again as an older adult following the break-up of his previous marriage with ex-wife Jade.

“I was homeless. You heard me right – yes, homeless. Everything fell down for me,” he confessed.

Unlike his father, who he says broke “promises” to his mother and left her to raise him alone without help, Jay gave Jade security by leaving her the family home when he walked away.

“My marriage broke up, my business broke up [but] I left my ex-wife the house and everything like that,” he told the Daily Star.

He later admitted to the Radio Times that he “just drove” away without any idea of where he was going.

Jay had once had a great relationship with Jade, and the pair even launched a scheme helping disadvantaged young people learn the skills needed to restore old furniture.

The cause was very important to Jay, as someone who had battled poverty and emotional hopelessness in his earlier life.

He even mentored Little Mix star Leigh-Anne when she was just 14.

However, eventually his business failed – and his distress sky-rocketed.

“The state that I was in, I would have taken my own life, and I came close,” he revealed candidly.

Prior to that, the pressure of fame was also a factor that rocked the pair’s relationship.

“I’ve always had a lot of attention from community members,” he recalled to iNews.

“There was a stage where my ex-wife wouldn’t let me go to the shops to get milk or I’d come back four hours later because everyone was talking to me!”

After the relationship broke down, he left the family home which Jade shared with their teenage daughter Zola and eventually moved to Wolverhampton.

Now he seems to have found happiness again with fiancée Lisa.

Anyone struggling with suicidal thoughts should contact the Samaritans for help and support with their feelings on 116 123.