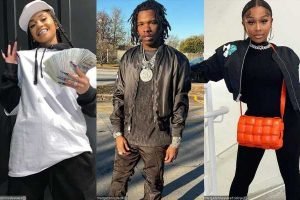 Jayda reveals in a new interview that she has ‘sources’ to keep her informed about what happens out there, including her ex’s alleged romance with the ‘Best Friend’ raptress.

AceShowbiz –Jayda Cheaves wasn’t really surprised by dating rumors involving her ex Lil Baby and raptress Saweetie. In a new interview, Jayda explained her take on the rumors and why she doubled-tapped a post about the two musician’s alleged romance.

“One ‘like,’ all I have to do is ‘like’ something and the whole internet is in a frenzy,” Jayda told Hollywood Unlocked’s Jason Lee. When she was asked if the action was her congratulating the couple or being petty, Jayda replied, “Sometimes I just like to put the internet in a frenzy.”

She went on to explain she always “knew” about Lil Baby’s relationship with the “Best Friend” femcee. “I was really liking it because I knew that story before-the day it happened, I knew about it,” she shared.

“That’s the thing, social media, they always a week, two weeks behind on the stuff I already know,” Jayda divulged, adding that she has “sources” to keep her informed about what happens out there. “Everything that has ever came out on social media, before it hits the media, it’s something me and him been talked about. It’s crazy, but this is my life.”

“Like I told Baby, ‘How you gonna do that to Ms. Chanel herself, like, you don’t think I would find out about that?’ I spend bank in Chanel on the weekly. This is what I do. C’mon, now,” Jayda revealed, referring to reports that Lil Baby and Saweetie went to have a shopping spree at a Chanel store.

Lil Baby, whose real name is Dominique Armani Jones, sparked dating rumors with Saweetie after Hollywood Unlocked reported that the Atlanta native spent nearly $100,000 on his rumored new girlfriend in the Chanel store in New York. A source insisted that there was actual security footage from the store to support the story.

The “Woah” rapper, however, denied the speculations. He took to his Twitter page on Thursday, November 25 to respond to the dating speculation. “Baby not dating NO ONE !! I’m Single !” he tweeted at the time.