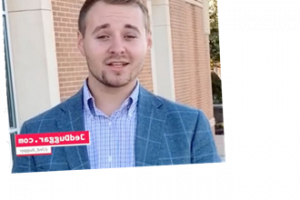 Before they were a reality TV family, the Duggars were a political family.

Jim Bob Duggar held a seat in the Arkansas House of Representatives from 1999 to 2002, and he unsuccessfully sought the Republican nomination for a seat in the United States Senate.

Those who know him best say Jim Bob’s ambitions all still more closely linked to the world of politics than the media world that made him a household name.

Although these days, JB is less interested in running for office himself than in watching one of his sons carrying on his legacy.

For a time, it looked as though Josh Duggar would be the one to take up the mantel.

As you may recall, while he was still in his twenties, Josh launched a successful career as a DC lobbyist.

But the Josh Duggar sex scandals sent him slinking back to Arkansas, where he now supports himself by working on a used car lot owned by his father.

These days, Jim Bob has set his sights on a younger prospect through whom he might vicariously rise through the ranks of the Arkansas political world.

Yes, Jedidiah Duggar is running for office, and Jim Bob is doing everything in his power to make sure the 21-year-old’s campaign is a success.

He already bought Jed a house in the district in which he’s running, and those who have been monitoring the situation closely say JB is throwing his full support behind his son’s political ambitions.

So the kid’s got a war chest and name recognition his opponents could only dream of.

Unfortunately, it seems Jed is lacking in one very important area — namely, he appears to have nothing substantive to say about the major issues facing this country and his potential constituency.

No big surprises there, as he’s pretty much just sticking to the conservative orthodoxy that encapsulates his family’s belief system.

There’s nothing there that will help Jed stand out from the pack in Arkansas primary, but he’s probably hoping his famous last name will take care of that for him.

But the most successful politicians are often those who can think on the fly and address new challenges as swiftly as they arise.

As The Blast reports, Jed’s supporters have become concerned by his lack of insight regarding both the coronavirus pandemic and the current climate of racial unrest.

Jed has yet to make any sort of statement regarding Covid-19, or the police murders of George Floyd and Breonna Taylr.

Obviously, these are the top news stories of the day, and they have been for quite some time.

Jed’s silence on the matters have reportedly become a cause of concern for his supporters, especially since the young candidate has decided to dodge the issues by saying nothing at all.

Jed hasn’t posted anything on social media in nearly a week — a lifetime in the world of politics.

His most recent post is the pic below from June 16:

Meanwhile rumors that the Duggars believe the coronavirus is a hoax have been circulating non-stop on social media, and it seems that Jed has no intention of addressing them

And he’s clearly frightened to address the recent Black Lives Matter protests, either because he’s afraid to say the wrong thing, or because he knows his views are problematic.

Unfortunately for Jed, his weakness in these areas is obvious.

And even if his opponents don’t seize on this vulnerability, voters are certain to pick up on it.

Fortuntately, Jim Bob has many other children he can groom for success in the political arena.