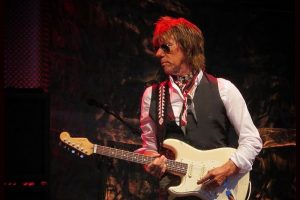 English rock guitarist Jeff Beck and actor Johnny Depp have released a cover of The Velvet Underground‘s “Venus in Furs.”

The song is the latest track from the pair’s forthcoming joint album, 18, due July 15.

“Venus in Furs” was written by Lou Reed and originally released on the 1967 album The Velvet Underground & Nico.
Inspired by the book of the same name by Leopold von Sacher-Masoch, the song includes sexual themes of sadomasochism, bondage and submission.

Beck and Depp met each other in 2016 and quickly became friends. In time, Beck found about Depp’s songwriting skills and interest in music. Beck wanted to make an album together. Depp agreed and they started in 2019.

Over the next three years, they recorded a mix of Depp originals along with a wide range of covers.

18 will be available on CD and digitally, with a 180-gram black vinyl version coming on September 30. The cover features an illustration of Beck and Depp as 18-year-olds that was drawn and designed by Beck’s wife, Sandra.

“When Johnny and I started playing together, it really ignited our youthful spirit and creativity. We would joke about how we felt 18 again, so that just became the album title too,” Beck says of the title.

Leading up to the release of 18, Beck has launched a European tour, with Depp as a special guest, which will conclude on July 25 at L’Olympia in Paris.