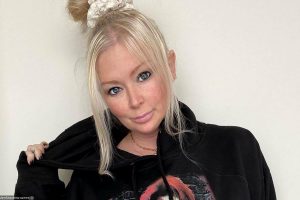 When confirming that she’s dealing with the rare neurological disorder, the former adult film star explains that she will remain in hospital until her treatment is complete.

AceShowbiz –Jenna Jameson has gotten candid about her health scare. The former adult film star revealed that she’s now being treated in hospital after she lost her ability to walk due to Guillain-Barre syndrome.

Making use of her Instagram account on Monday, January 10, the 47-year-old shared a video of her detailing her condition while lying in her hospital bed. “I’m in the hospital still. And we’ve gotten some answers,” she began explaining. “I’m dealing with a little syndrome called Guillain-Barre Syndrome, so I’m working through that.”

“And I just wanted to let you know that I see all your DM’s and I appreciate it so much,” Jenna continued. The “Zombie Strippers” star then told her fans and followers that she’s getting her second infusion of IVIg. “We’re just working towards getting better,” she said in the clip.

In the caption of the post, Jenna thanked her fans for their outpouring support, “Hey guys, first of all thank you for all the love and support through my DMs. I see each and every one of you, and I appreciate it.” She then explained, “The doctors suspect Guillain-Barre syndrome and have started my IVIG treatment.”

Days earlier, Jenna’s partner, Lior Bitton, said that she was in the hospital undergoing testing after “not feeling so good.” Lior added that Jenna had been “throwing up for a couple weeks” and went to the hospital last week, but after a CT scan came back clear, doctors released her to return home.

“Then she came back home and she couldn’t carry herself,” Lior revealed in a video he posted on Saturday via his wife’s Instagram page. “Her muscles in her legs were very weak. So she wasn’t able to walk to the bathroom. She was falling on the way back or to the bathroom, I would have to pick her up and carry her to bed.”

Lior added, “And then within two days it go really not so good, her legs started to not hold her, she wasn’t able to walk.” The Israeli businessman then decided to take his fiancee back to the hospital. After undergoing an MRI test and a spinal tap, the doctors declared that she had Guillain-Barre syndrome.

Guillain-Barre is a rare neurological disorder where the body’s immune system mistakenly attacks the nervous system, causing muscle weakness and temporary paralysis. Reasons behind people developing Guillain-Barre isn’t yet known, but most cases occur after a respiratory or gastrointestinal viral infection, according to the National Institutes of Health.