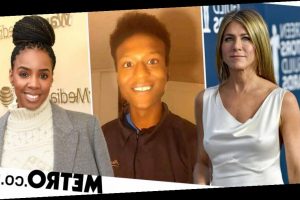 Jennifer Aniston, Kelly Rowland and Ellen DeGeneres have led the stars demanding justice for Elijah McClain, after he died after an arrest last year.

McClain, an unarmed black man, died after a brutal arrest which saw him injected with ketamine by a medical officer.

The 23-year-old was stopped by Colorado police on 24 August 2019 as he went out to buy iced tea for a family member from a local convenience store.

He was approached by officers after they got a call about a ‘sketchy’ looking man who was wearing a ski mask – with McClain’s family later revealing that he often wore an open face ski mask while walking because he was anaemic and sensitive to the cold.

Although McClain was not armed or suspected of committing any crime when he was stopped, he was aggressively pinned to the ground and put in handcuffs.

Footage of the arrest show him sobbing and he repeatedly vomited while being detained.