Jennifer Lopez & Alex Rodriguez DID Break Up Over The Madison LeCroy Cheating Scandal! 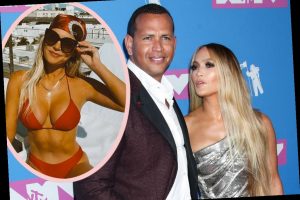 Can’t blame this one on the pandemic!

We were floored on Friday over the news Jennifer Lopez and Alex Rodriguez were calling off their engagement and going their separate ways. They had seemed like the perfect couple with their mutual devotion to parenting, their shared affinity of fitness, even their business acumens seemed perfectly complementary.

So what pulled these two apart? Sadly, it’s a tale as old as time — and it ain’t beauty and the beast.

Yes, according to an inside source spilling to Page Six, it WAS the Madison LeCroy cheating scandal that split the power couple down the middle. The source claims:

“The Madison LeCroy scandal was the reason they finally broke up. There were already problems, but Jennifer was really embarrassed by it.”

In case you missed it, the Southern Charm star got the rumor mill churning after she was accused during the reunion special of having cheated on boyfriend Austen Kroll with “ex-MLB star.” She admitted there had been contact — but nothing that had been consummated:

“He contacted me, and yes, we DMed, but other than that there was nothing… I’ve never seen him touched him.”

People quickly guessed the baseball star was A-Rod, something Madison confirmed herself a few days later. She told Page Six in February they had “spoken on the phone” but had “never met up”:

“He’s never physically cheated on his fiancée with me. I don’t want anything bad for his family, or for mine. We are definitely innocent in this.”

Spoken like someone who hasn’t been married. For a woman in long term relationships, ready to get walk down the aisle, jut knowing your man reached out to some reality star 20 years younger is enough to not be considered “definitely innocent.”

And talking on the phone? FaceTiming? All in secret? Come on, gurl. That’s a big line to cross.

Speaking of secrets, one of Madison’s co-stars claimed there was “an NDA signed” by the 30-year-old which kept her from saying more. Trés suspicious, no?

Well, it’s no wonder with all that out there folks have been speculating it was the cause for the breakup. They projected a strong, united front for weeks after the scandal broke, but you can’t keep that going forever.

According to a source speaking to People earlier, the breakup “has been a long time coming” and has taken so long because the (now ex) couple are trying to figure out how to untangle their businesses. Oof, sounds awful.

And all because A-Rod couldn’t help but keep his options open with hot young Bravo-lebrities. Ugh.