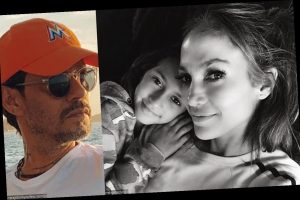 The ‘Let’s Get Loud’ hitmaker, who is said to have called off her engagement to fiance Alex Rodriguez, shares a photo of her FaceTiming her ex-husband and their crying teen daughter.

AceShowbiz –Jennifer Lopez and Marc Anthony made sure their children can always rely on them. Hours before reports about her split from Alex Rodriguez hit media headlines, the “Let’s Get Loud” hitmaker offered a look at the moment she and her ex-husband consoling their crying daughter, Emme.

On Friday, March 12, the 51-year-old star posted on Instagram Story a photo of her FaceTiming her ex, whom she was married to for 10 years, comforting their teen daughter. “When they are sad but momma and daddy are there #Coconuts. I love you!! So proud of you,” she wrote in the accompanying message.

Hours after J.Lo shared the post, Page Six reported that she and fiance A-Rod have called off her engagement. The couple, who got engaged in early 2019 after being together for two years, was unveiled to have spent time apart. A source told the outlet, “He’s now in Miami getting ready for baseball season, and she’s filming her movie in the Dominican Republic.”

The “On the Floor” singer, who has been in the Dominican Republic to work on “Shotgun Wedding“, has not posted any pictures of her rumored ex-fiance on Instagram since February 27. At that time, she put out PDA-filled snaps with the former MLB star as they celebrated the country’s Independence Day in honor of his heritage.

As for A-Rod, his latest Instagram post was shared on Friday, March 12. It displayed him enjoying his time in a yacht back in Miami, Florida. In the caption, he penned, “Don’t mind me, just taking a sail-fie. What are your plans for the weekend?”

The split report came after the pair were forced to postpone their wedding twice due to COVID-19 concerns. “We had to cancel the wedding … because of COVID, because of the quarantine,” she stated in December 2020. “And we actually did it twice, which people don’t know.”

It was unclear what led J.Lo and A-Rod to part ways. However, the athlete was said to have FaceTimed “Southern Charm” star Madison LeCroy. “[We’ve] never been physical… never had any kind of anything. Just an acquaintance,” Madison told Page Six in early February. “He’s never physically cheated on his fiancee with me… [I] talked to him randomly, but not consistent.”