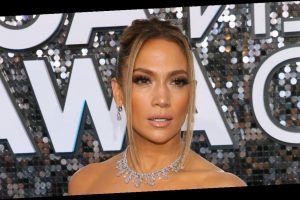 The red carpet has started for the 26th Annual Screen Actors Guild (SAG) Awards and Jennifer Aniston, Jennifer Lopez and Reese Witherspoon led the way with their stunning fashion choices.

Jennifer Lopez looked the ultimate superstar as she made a glamorous arrival at The Shrine Auditorium in Los Angeles in a sexy black dress.

The A-lister, 50, oozed Hollywood glamour as she unveiled a chic strapless gown with a subtle split teasing a glimpse at her toned legs.

The global sensation accessorised her red carpet ensemble with dazzling diamonds and she accentuated her glowing chest with a flashy necklace.

Jennifer pulled her golden tresses back into a stylish updo while she showed off a dramatic smokey eye make-up look.

Joining JLO on the red carpet was Jennifer Aniston who wore a striking white satin dress teasing a glimpse at her amazing figure.

The iconic actress, 50, looked sensational in the sexy satin gown which featured a flattering mermaid hemline.

The Friends star exuded ultimate elegance in the simply stunning gown as she posed up a storm on the red carpet.

Reese Witherspoon joined the Hollywood icons at the SAG Awards.

The actress, 43, looked glamorous in a glitzy black dress which featured an across the shoulder strap in a shimmering silver shade.

The star flashed a sneak peak at her enviably toned pins as she posed to show off the dress's sexy thigh-high split.

Reese wore her blonde locks in a dramatic side parting and she completed her look with a pair of matching strappy stilettos.

She looked like the ultimate superstar in a long-sleeved navy dress complete with dazzling sequin embellishments.

The dress featured a fluted waterfall style hemline which teased a glimpse at the star's legs.

She completed her red carpet ensemble with a pair of bejewelled stiletto heels.

The actress, 35, opted for a vibrant metallic number as she appeared to choose a mermaid inspired gown.

The slinky dress oozed sex appeal as it featured a dramatic plunging neckline and the star added a vibrant pop of colour with a striking red lipstick.

Dakota Fanning dazzled at The Shrine Auditorium in a fiery fashion statement that oozed sex-appeal.

The actress, 25, stepped out in a plunging shimmering dress with a glitzy mesh skirt.

The trailing gown featured a plunging neckline and a cut-out design accentuated her sensational figure and teased a glimpse at her toned abs.

The blonde beauty wowed in the shimmering silver dress which appeared to be embroidered with sparkling sequins.

She opted for a simple make-up look to accentuate her natural beauty and wore her famously blonde tresses in perfectly blowdried waves.

The raven-haired actress, who famously plays Veronica Lodge on The CW teen drama television series Riverdale, couldn't contain her smile as she strutted into the event, teasing a glimpse of her glowing chest.

The actress, 25, dazzled in a shimmering nude dress with glitzy sequins and a plunging neckline reaching her stomach.

Featuring a dramatic off-the-shoulder design, Camila showed off her enviable frame as she posed up a storm at the glam event.

The actress wowed on the red carpet in a quirky dress with billowing satin material and an oversized bow design.

The Missandei star looked sensational as she made a statement in the unique dress which featured a pretty flower pattern in shimmering nude shades.

Nathalie wore her raven dresses in a tousled updo, while she opted for a subtle make-up look.

Millie Bobby Brown oozed chic as she stepped out in a glamorous white suit ensemble with a dramatic over coat and matching tailored trousers.

The 15 year-old looked as glamorous as ever as she flashed a glimpse at her dazzling smile.

Joining the glamorous arrivals was Zoe Kravitz who made a vibrant red carpet display in a peach coloured dress.

Adding a quirky touch to her ensemble, the actress added a pair of chic white gloves.

The strapless number featured a pretty bow design and ruched detailing on the hemline.

The annual show in Los Angeles celebrates acting achievements in film and television.

The SAG awards are indicators of likely Oscar success because actors form the largest group of voters in the Academy of Motion Picture Arts and Sciences.

Usually, about four out of five individual SAG nominees go on to land an Oscar nomination.

END_OF_DOCUMENT_TOKEN_TO_BE_REPLACED

END_OF_DOCUMENT_TOKEN_TO_BE_REPLACED
We and our partners use cookies on this site to improve our service, perform analytics, personalize advertising, measure advertising performance, and remember website preferences.Ok