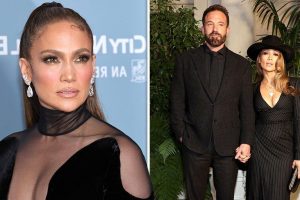 Jennifer Lopez and Ben Affleck married earlier this year, almost two years on from breaking off their first engagement. The glamorous pop star has since faced backlash from some critics who feel it was unfeminist of her to take her husband’s last name.

The Jenny from the Block singer opened up about her choice to change her last name, despite still being known as Jennifer Lopez in the celebrity world.

She explained that, while people would continue to use her maiden name, her legal name will now be Mrs.Affleck because the pair are “joined together”.

Jennifer went on to reflect on how keeping her changing her name after tying the knot feels like “a power move”.

Asked if she was tempted to keep her own last name, she replied: “We’re husband and wife. I’m proud of that. I don’t think that’s a problem… It’s not traditional. It doesn’t have any romance to it. It feels like it’s a power move, you know what I mean?”

The star went on to add that she liked the “tradition” and “romance” of taking Ben’s surname.

“I’m very much in control of my own life and destiny and feel empowered as a woman and as a person. I can understand that people have their feelings about it, and that’s okay, too,” she said.

“But if you want to know how I feel about it, I just feel like it’s romantic. It still carries tradition and romance to me, and maybe I’m just that kind of girl,” the star admitted in her interview with Vogue.

Ben and Jennifer announced they had tied the knot earlier this year on July 16, sharing sweet snaps from the romantic occasion on social media.

The world-famous pop star dated the Good Will Hunting star for 18 months before they suddenly split in 2004, but now, the couple are back together.

Ben previously was in a relationship with famous actress Jennifer Garner, whom he married back in 2005, but the pair went on to split and their divorce was finalised in 2018.

Lopez dated Affleck before he had begun dating Garner, with the pair famously breaking up 20 years ago.

Meanwhile, Lopez was also previously married to ex-husband Marc Anthony, 54, between 2004 and 2014.

All parties appear to be on good terms, with Affleck and Lopez having since planned to invite their exes to a lavish Christmas party this year, according to reports.

The newlywed couple have plans to celebrate both Christmas and the American holiday Thanksgiving together, throwing a “huge celebration” for their nearest and dearest.

The pop star and Argo actor are keen for their children to celebrate the upcoming holidays with all their parents present as “one big family”.

A source told Entertainment Tonight that it is not confirmed if either ex would accept the party invitation but added there is “no bad blood” between the families.

The source said: “They have to sort things out with both sets of kids and their exes, but they would love to have all the kids together with them as one big family and are working on that now.”

Express.co.uk contacted all parties for comment at the time.