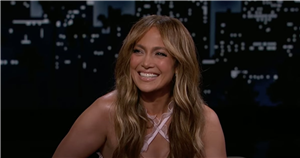 Jennifer Lopez is still glowing over her recent nuptials with husband Ben Affleck. The “Shotgun Wedding” star stopped by “Jimmy Kimmel Live!” on Wednesday night to promote her new rom-com, but the chronicles of Bennifer and the couple’s two-part whirlwind wedding were the main topics of discussion.

Lopez and Affleck tied the knot in an intimate Las Vegas ceremony last July, nearly two decades after calling off their 2003 wedding. They married again a month later in Georgia, joined by their friends and families. During her late-night appearance, Lopez recalled the pair’s spur-of-the-moment decision to wed before their big Georgia ceremony, revealing that the stress of it gave her flashbacks to their planned 2003 wedding.

“I was like, ‘Is this happening? Is this really happening?'” she said to Kimmel. “We were so happy and of course, it was happening, but I just felt like the wedding was so stressful, and one day Ben just says, ‘F*ck it, let’s just go to Vegas and get married tonight.'” The singer said Affleck had everything all set up, with two of their kids as witnesses, and called it “the best night of our lives.”

Lopez also remembered waiting at the county clerk’s office for their marriage certificate, where they encountered two couples who were curious about what was happening. “We went at the last, last minute, and everybody was kind of chill, you know, nobody was freaking out or anything, but they were talking to us like, ‘Hey, what are you doing here?'” she said. “And we’re like, ‘We’re getting married!'”

Lopez said their Vegas wedding did not include an Elvis Presley impersonator, but it was so memorable that she wrote a song about it on her upcoming ninth album, “This Is Me . . . Now.” She also received a late gift from Kimmel, truly fitting of her and Affleck’s romance: matching bride and groom Dunkin’-branded cups.

Watch Lopez dish all the details about her Vegas and Georgia weddings, as well as her forthcoming album, above.