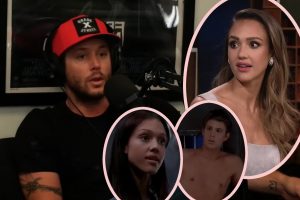 The Supernatural star appeared on Michael Rosenbaum‘s Inside of You podcast on Tuesday and didn’t pull any punches when it came to co-star feuds.

Photos: Stars Who Refused To Film Scenes Together

When the Smallville alum asked if Jessica Alba was “cool to work with” in his early days on the 2000 science fiction show Dark Angel, Jensen flat-out said:

And he was not joking, as he assured Rosenbaum, saying he’s not afraid to say it either:

“I have told this to her face.”

He said he loves Jessica now, but at the time she was “under an immense amount of pressure” and took it out on him! He mentions her “rocky” relationship with co-star Michael Weatherly as being a major factor.

“That was rocky and causing some undue stress, I believe, on set, and I was the new fresh face on the set… I was just kind of, I was the new kid on the block and I got picked on by the lead.”

Asked to explain what he meant by being “picked on” he said:

“Like the worst kind of bickering a brother and sister could do. She had it out for me. It wasn’t that she didn’t like me. She was like, ‘Oh here’s the pretty boy the network brought in for more window dressing because that’s what we need.’”

He said he chose to fight “fire with fire” and hit back:

“So I was just like, ‘Oh, looks like we’re getting bitch Alba today, everybody hang onto your nuts.’”

The decision actually led to a functional dynamic — where they were both jerks to each other! He explained:

“Then she was like, ‘Okay, now I can just be a dick to him and he’ll be a dick to me and that’s how we’ll roll.’ It did build some mutual respect.”

Eventually, he said, the brother-sister style bickering became a sibling kind of love, where the two would spend a lot of evenings together when her man was away — but in a strictly “very platonic, very brother-sister” way.

And when he lost his grandfather during production, she showed her true colors.

“She literally walked into my trailer and just held me for half an hour.”

He says these days if she walked in the room the two would be “all hugs” — a far cry from the relationship that began with him feeling “bullied.”

See the full convo (below)!