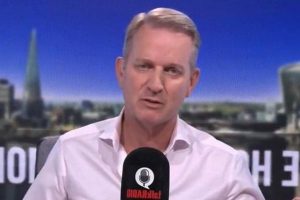 Jeremy Kyle has broken his silence after the release of the explosive Channel 4 documentary, Death on Daytime.

The 56 year old presenter, who fronted the ITV show for 14 years before it was axed, said there "are two sides to every story" as he discussed the programme on his radio show.

Jeremy appeared on TalkRADIO on Monday and reacted to the documentary, which he is also seeking legal action over.

Death on Daytime explored the tragic death of Jeremy Kyle guest Steve Dymond, who took his own life days after he "failed" a lie detector test on the show.

Steve, who was 63 at the time of his passing, appeared on the show to prove to his ex-fiancée Jane that he had not cheated on her.

Now, Jeremy has spoken out for the first time after the first episode of the documentary aired on Sunday.

Jeremy explained he would not speak about Steve's death in detail until all legal proceedings were complete. The inquest into Steve's death will take place later this month.

He said on the radio show: "Let's just deal with the elephant in the room straight away – couple of texts already talking about a certain programme that was on television last night.

"Yes, I am fully aware. I will say only this, my friends, to you.

"I have maintained a consistent approach over the last three years.

"I have said that I will not comment on the tragic death of Steve Dymond until the legal process has finished and that is a position I will maintain.

"When – and trust me, there will be a time after the inquest – when it is right and proper for me to have my say, because there are of course two sides to every single story, I will do it here and I will do it to you, and that is the most important thing."

He added: "With the greatest of respect, I wanted to say that."

It comes after Jeremy revealed he had called his lawyers in over allegations made in the documentary.

In a statement shared with The Sun, ahead of the doc's release, Jeremy said: "I would like to reiterate my deepest sympathies to the friends and family of Mr Dymond.

"I’ve consistently maintained it would be inappropriate to discuss the tragic death of Steve Dymond before the legal inquest into it has concluded.

"Likewise, the false and damaging allegations made against me by Channel 4 are with the lawyers now.

"No doubt ITV will address the issues raised by Channel 4 around ITV’s production of The Jeremy Kyle Show themselves, it would be wrong for me to speak on their behalf.

"Now is not the time to debate or discuss what is an ongoing legal process. When I can respond, I will."

ITV also shared a statement with the Channel 4 programme, which read: "The Jeremy Kyle Show was broadcast for 14 years.

"In that time, more than 20,000 people took part in the show seeking help to resolve relationship issues, or to address drug or alcohol related problems.

"The central purpose of the show was conflict resolution, and the show achieved many positive outcomes where people were able to resolve personal problems.

"The Jeremy Kyle Show had extensive and detailed duty of care processes in place for contributors built up over 14 years.

"It had a dedicated guest welfare team of mental healthcare professionals with decades of experience in NHS mental healthcare, who were focused on the welfare of guests throughout the production process.

"Guests were supported by the programme and welfare teams prior to filming, throughout filming and after filming.

"Should they require ongoing help then appropriate solutions were found for them, which could include residential rehabilitation, counselling, anger management, family mediation, child access mediation or couples counselling.

"Due to the gravity of events in May 2019, namely the death of a guest a few days after taking part in the show, ITV decided to end production of the show. It would not be appropriate for ITV to comment further on that in advance of the inquest to be held later this month.

"ITV does not accept the central allegation of this programme of a “bad culture” within the production team. We note that the programme includes anonymous former production members claiming wrongdoing by themselves and others, without supporting evidence. ITV would never condone any of its production staff misleading or lying to guests. All guests on the Jeremy Kyle Show were aware of the nature of the show and the presenter’s style before taking part in recording. Most of those who applied to appear watched the show themselves. All guests gave their informed consent, in writing, to take part.

"Since 2018 ITV has taken significant steps in relation to its duty of care of participants. ITV issued detailed new guidance to all its producers on protecting participants in October 2019, which represents industry-leading good practice and now reflects the changes to the Broadcasting Code made by industry regulator Ofcom in 2021.

"ITV also ensures greater management oversight of participant welfare through a Duty of Care Board, and has created a Mental Health Advisory group involving mental health charities to advise ITV on its policies for staff and programme guests."