Home » Jersey Shore Cast: Ronnie is a “Ticking Time Bomb” Who Must Go!

Jersey Shore Cast: Ronnie is a “Ticking Time Bomb” Who Must Go! 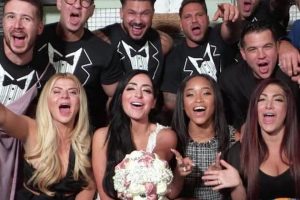 Ronnie Ortiz-Magro is a troubled and damaged individual who is a threat to almost everyone around him, and he clearly needs professional assistance.

This, according to those who know the MTV personality best.

To the long-time cast member’s credit, he’s taking a break in order to focus on his mental health.

“After talking to the team at MTV, we have mutually agreed that I will step away from the show,” Ronnie explained on Instagram, adding:

“[I will do so] while I seek medical treatment for mental health issues that I’ve ignored for too long.”

Ortiz-Magro arrived at this decision a few weeks after getting arrested for domestic violence, allegedly against girlfriend Saffire Matos.

Following this arrest, Ronnie went on a social media rant against ex-girlfriend Jen Harley and Harley’s new boyfriend, even threatening to run the latter over with a car.

Ronnie, of course, was also arrested for domestic violence in the fall of 2019 after reportedly holding a knife to Harley’s throat and then yanking the former couple’s daughter out of her arms and then barricading himself inside of a rental home in Los Angeles.

Police had to use a taser on Ronnie in order to take him into custody.

Considering all these alleged incidents, along with Ronnie’s threatening presence on social media, The Sun has now quoted a source close to the star’s Jersey Shore castmates.

“The entire cast has said they don’t want to film with him because they believe he is not mentally stable,” claims this insider.

“They feel he is a ticking time bomb and he makes all of them look bad.”

We can’t verify the veracity of this information — but one couldn’t blame Vinny, JWoww or anyone in the crew for feeling that way, could one?

Ronnie was notably NOT featured on the trailer for upcoming new episodes of Jersey Shore: Family Vacation, which was released earlier this week.

And now we know why.

“The cast doesn’t know if Ronnie has been politely fired,” reports The Sun.

“He has been part of the filming until now, but they don’t know if anything he has filmed will air.”

“My number one goal now is facing my struggles head on.

“This process will be difficult, but my #1 priority is to get healthy and be the best man and best father I can for my daughter.”

Earlier this week, Ronnie had hinted that he was suffering from mental illness.

“It’s okay to feel unstable,” he wrote in an especially message, adding at the time:

“Your mental illness is not a personal failure.”

“He is currently seeking medical treatment,” they told Us Weekly.

The treatment is “for psychological issues that he has ignored for a long time” and:

“His only present goal is to address these issues professionally and make himself [a] better person and the best father he can be to his loving daughter.”

For the legal record, Ronnie will not be charged with any crime for his most recent altercation with Matos.

However, he still may have violated his probation from his previous arrest and, at a hearing next month, he may be sentenced to time behind bars.

Also, for the record:

Sources tell E! News that Ronnie is not in rehab for alcohol or drug use, but instead is at some kind of “wellness center.”

We wish him well.