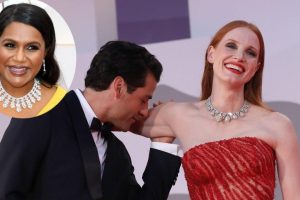 That viral moment between Oscar Isaac and Jessica Chastain at the Venice Film Festival made such a splash that even the stars are recognizing it!

Though Chastain, 44, already hinted at the romantic exchange between her and her Scenes From a Marriage co-star, she went even further when pal Mindy Kaling called her out.

“Why is Oscar Isaac the only person allowed to kiss your inner arm,” Kaling commented on a video of Chastain getting ready for her red carpet appearance.

Of course, Kaling is referencing the imitate moment the two actors shared on the red carpet in which Isaac, 42, was filmed and photographed rubbing Chastain’s arm while gazing at her before leaning in to kiss the inside of her arm.

Chastain initially responded to the buzz by promoting their upcoming HBO Max miniseries, Scenes From a Marriage. She posted a picture of Gomez Addams from The Addams Family films kissing his wife, Morticia’s, arm. Isaac voiced Gomez in the animated version of The Addams Family.

“Sept 12th 😈,” she wrote, referring to Scenes From a Marriage’s release date.

Both Chastain and Isaac are happily married in real life and not to each other.

Chastain and Isaac play a married couple navigating the ups and downs of their relationship in HBO’s new limited series. The five-episode limited series is based on Ingmar Bergman’s 1973 Swedish miniseries of the same name. Isaac plays Jonathan, a passive philosophy professor, while Chastain plays Mira, an ambitious tech executive.