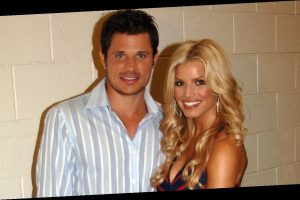 Jessica Simpson is getting candid about her divorce from Nick Lachey. ET has an exclusive look at the new paperback edition of Simpson’s 2020 memoir, Open Book, which features a new introduction and diary entries.

In one handwritten entry, Simpson journals about how hurt she was when Lachey moved on with someone else shortly after their split. Simpson and Lachey were married from 2002 to 2006. Lachey began dating his current wife, Vanessa Lachey, less than a year later, before they tied the knot in 2011.

“So, Nick, you’re with another already? Seems that you forgot the love you spoke to me,” Simpson writes. “I’m saddened beyond belief. Alone in the dark, with no one to call my own.”

When ET spoke to Simpson last year, she recalled one of the factors that led to the end of her and Lachey’s marriage.

“With Nick, I was 22 years old when we got married… Once I started to get endorsement deals that were separate from him, there was a little bit of tension,” she said. “[The press] put us as a trophy couple that we actually weren’t.”

In the years that have passed since their split, though, Simpson told ET that she’s happy both she and Lachey have found contentment.

“We both were at fault in a lot of things, but I’m happy for him now. He’s married with three beautiful children,” she said of the Lachey kids, Camden, 8, Brooklyn, 6, and Phoenix, 4. “He took heartbreak and made it into something beautiful.”

In addition to the new diary entries, which will also cover topics including Simpson’s mom jeans controversy, the paperback edition of Open Book includes a new introduction, in which Simpson writes about more about the sexual abuse she experienced as a child.

Simpson first publicly discussed the topic in Open Book, claiming that, when she was six years old, the daughter of a family friend began abusing her when they would share a bed on overnight visits.

In the introduction, Simpson reveals that she decided to tell her daughter, Maxwell, about her experiences after an abuse survivor became emotional in front of them during a book signing.

“When she walked away, Maxwell asked, ‘What was she talking about?'” Simpson recalls. “This was going to have to be the time for our talk. Parents have to seize these moments when you have your kids’ attention.”

In her interview with ET last year, Simpson shared what she would want Maxwell to do if she ever experienced similar abuse, noting that she’d “want to know immediately.”

“I wanted other moms to read it and be aware that this stuff is happening,” she said at the time.

The paperback edition of Open Book will be available Tuesday, March 23.