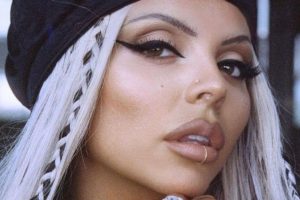 Jesy Nelson has shared some exciting news with her fans as after months of speculation the singer revealed when her debut single will be released.

The former Little Mix star will be teaming up with US rapper Nicki Minaj for her hotly-anticipated track Boyz.

Taking to Instagram, brunette beauty Jesy shared the cover art for the song which featured her and Nicki posing next to each other.

Jesy, who recently celebrated her 30th birthday with a fantastic party, was taking it back to the early 2000s with her skater-style look.

Her platinum blonde locks fell sleek and straight and she showed off her svelte figure with a bra-let and cut-off shorts.

She finished off the edgy outfit with a black beanie hat, matching socks and star-print trainers.

While Nicki swept her dark locks into a high ponytail and slipped on a pair of grey 60s style sunglasses.

The rapper opted for a black dress and fluffy white gilet for the shoot, as Jesy poked her tongue out and gave a wink.

A while ago, Jesy teased her fans with an Instagram post that read: “I spy with my little eye something beginning with…. B".

She echoed the same words in her Story today before releasing the new cover work.

The star also recently confessed she was excited to finally have creative control over her career and song choices.

"For me, this is the music that I've always wanted to make,” she said in another video.

"You can genuinely believe something up," the star later added.

"If you want it you can make it happen – you can manifest it."

Stay up to date with all the latest on Jesy Nelson stars by signing up to OK!'s daily celebrity newsletter.