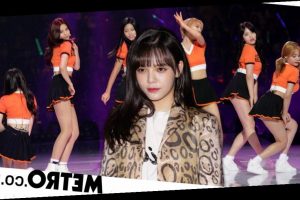 Soompi reports that FNC’s statement on Saturday [4 July] says: ‘This is FNC Entertainment.

‘First, we would like to apologize for causing concern to many people through the events related to Jimin that have been unfolding recently.

‘From this moment forth, Jimin has decided to leave AOA and halt all of her activities in the entertainment industry.

‘Additionally, our agency accepts responsibility for this entire situation, and we will put our full focus on managing our artists [in the future].

‘Once again, we apologize for causing concern through these unfortunate matters.’

Former AOA member Mina claimed on Instagram just one day earlier that an unnamed band member had bullied her after the death of her father, which fans thought to be Jimin due to clues in the statement.

The 26-year-old claimed that an ‘unnie’ (an older female) told her that she was ‘ruining the mood’ by crying after her father died from cancer in 2014.

Jimin, 29, appeared to hit back at the posts in a quickly deleted Instagram story saying ‘fiction’.

‘Any other bullying? Any other harsh words? They’re all fine. It was such a scar but we got in the same car afterward so I forced myself to go to sleep. I needed to do a good job with my schedules but I felt myself breaking.

‘Honestly, I’m okay even if you people never respect me as an idol or an actress. But I was really happy, and I tried really hard. I still love being in this area of work.

‘I was never stressed about being an idol, and in truth, I never wanted to leave AOA; but because of one person who hated me, in the end, I gave up AOA.

‘I really had fun promoting as AOA with the other members. But some time ago, that unnie’s father passed away, and I felt so sad and strange. At least I know exactly how that feels. When I went to the funeral she came to my crying, telling me she was sorry. It was so unfulfilling, and my heart really broke down.’

Fans assumed the claims were about Jimin as Jimin’s father died from a heart attack in April 2020.

Mina continued: ’Everything emptied itself after that. I felt okay, I let go of the blame but by then, I was already too broken. I’m scared. I’m having some time to myself on hiatus now and I knew.

‘I wanted to try learning a few things, maybe try to receive treatment for my depression and anxiety. But it turns out, even during a hiatus a lot of things happen. I’m so tired.

In a separate post, Mina wrote: ‘I can’t ever forget what you said to me, what you did to me, I remember everything, even if it’s fuzzy.’

She added: ‘Even now, no one knows, not me or the other members, why did you hate me so much?’

Star News reported that Mina’s agency is in contact with her at this time. The singer had joined AOA in 2012 along with Jimin, Yuna, Hyejeong, Seolhyun, Choa and Chanmi.

Choa announced she was leaving the band in 2017 due to mental health struggles and Mina decided not to renews her contract in May 2019.

Following her posts, Mina later revealed that Jimin had visited her in person to talk things out and apologise and although she chose to accept Jimin’s apology, she added that she was unsure whether it had been sincere.

As well as reportedly apologising to Mina in person, Jimin also appeared to post a public apology on Instagram on 4 July.