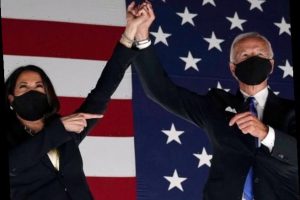 Donald Trump’s biggest nightmare has turned into a reality.

That he lost the Presidential election to Joe Biden?

Nope. Even though he did.

But we’re talking here about Biden and his Vice President-Elect, Kamala Harris, having now been named TIME’s Person of the Year, a honor Trump has openly craved for years.

He once made a fake cover of himself winning the distinction.

Yes, he really is that pathetic.

We digress, however. This, thank goodness, is NOT about Donald Trump for a change.

“Person of the Year is not just about the year that was, but about where we’re headed, and the next four years are going to be an enormous test of them and all of us to see whether they can bring about a unity,” TIME Editor-in-Chief Edward Felsenthal said on Thursday night.

Every elected U.S. President has been named Person of the Year at some point during his term.

Speaking to the publication, Biden said the following of the November election results:

“This moment was one of those do-or-die moments.

“Had Trump won, I think we would have changed the nature of who we are as a country for a long time.”

“We’re at a moment where we will be confronted by many crises that have converged.

“We’re talking about a public health crisis, we are in the midst of an economic crisis, a long-overdue reckoning on racial injustice, and a climate crisis.

“We got a lot of things that we need to handle, and we will multitask to address them all.”

Other figures noted on Thursday by this magazine included:

Why did Biden and Harris earn the highest honor, though?

“For changing the American story, for showing that the forces of empathy are greater than the furies of division, for sharing a vision of healing in a grieving world, Joe Biden and Kamala Harris are TIME’s 2020 Person of the Year.”

There you have it.

END_OF_DOCUMENT_TOKEN_TO_BE_REPLACED

END_OF_DOCUMENT_TOKEN_TO_BE_REPLACED
We and our partners use cookies on this site to improve our service, perform analytics, personalize advertising, measure advertising performance, and remember website preferences.Ok