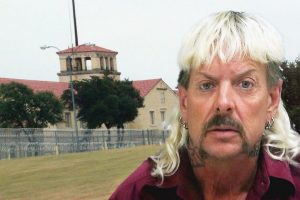 Joe Exotic is calling out his longtime adversary, Carole Baskin. ET has a new interview from inside the Federal Medical Center in Fort Worth, Texas, where the 58-year-old Tiger King star broke his silence on Baskin’s husband, Howard, saying they would support his early release from prison on one condition.

Exotic, whose real name is Joseph Maldonado-Passage, is currently serving a 22-year sentence for the 2017 murder-for-hire plot to kill Baskin as well as for multiple violations of wildlife laws. Howard recently told the Mirror that despite Exotic and his wife’s long history of rivalry, they would actually help Exotic get released from prison early if he supported the Big Cat Public Safety Act. Exotic says he is accepting their offer.

“It is time for Carole and Howard to put up or shut the hell up because I’m accepting their offer,” he says. “And I’m gonna take it one step further than that, OK? It is time to get on the phone to President Biden or whoever they need to that they’ve got in their little financial pocket and say, ‘Hey, Joe is willing to support a big cat bill to help protect cats in America from being exploited. But we need to keep our end of the deal and get Joe a pardon because this wasn’t really about murder for hire or shooting five tigers — this was about exploiting Joe to support Carole’s agenda.’ So, there’s the offer on the table, all right?”

The Big Cat Public Safety Act prohibits the private ownership of big cats like tigers, lions, leopards, and pumas to curb the cub petting industry. It was passed by the House of Representatives on Dec. 3.

“The way it’s written is not gonna help anybody except PETA and Carole Baskin,” Exotic claims. “So, I’ll testify in front of the Senate, I’ll testify in front of the House, they want to end big cats in America and they want to end the exploitation of them, I’m the man to do it. But it’s time to get an attorney general down here and listen to the evidence that I have to prove I’m innocent and get me the hell out of here. And they’ve got my support. Other than that, they need to stay the hell out of the news with all their crap just to get their name in the paper because I just called their bluff.”

ET reached out to 59-year-old Baskin, who stands by the offer.

“I wouldn’t seek a reduced sentence for Joe based upon him just saying he’d help end cub handling,” Baskin tells ET. “I think he’d say anything, but not actually do it. He’d have to actually work with authorities to bring all of his buddies to justice and work with legislators to end cub handling. Then, I’d want him to be rewarded for having done the right thing.”

Exotic has been in prison for two and a half years. He also commented on former president Donald Trump not giving him a pardon before leaving office. Last April, Trump told reporters he’d “take a look” when asked during a White House press briefing if he’d pardon Exotic, though acknowledged he knew nothing about the popular Netflix documentary.

“Trump, that chicken sh**, he left office and he’s only let people that he got in trouble out of jail,” Exotic says.

Meanwhile, in March, his 22-year-old husband, Dylan Passage, shared on Instagram that the two were “seeking a divorce” after three years of marriage. However, Exotic says the two have decided to stay married.

“You know, I talk to Dylan three times a day on the telephone, and we love each other very much,” he says. “He has been out there alone for two and half years because the first six months he lived in a car because we lost our house. The guy has been through hell and he has stood by my side the entire time and we were talking about a divorce a few weeks ago so he could move on and we talked about it some more and we decided to stay married.”

But Exotic says he would understand if Passage wanted to break up.

“You know, if he needs to move on I have to respect that, I can’t expect him to just hang on forever,” he notes. “He has told me time and time again … if I make it out of here alive, I still have a home to come to. So, he said he is not going anywhere, all right? That is all I can say because that is all I know.”

“I have CVID, which is a common variable immune disease, which means I have no immune system, and I have to get blood infusions every three to four weeks, and I’ve only been getting them every three months,” he claims. “I was weighed again last week and I lost another 10 pounds, last week alone.”

“I have hemoglobin anemia, which is another blood disease,” he continues. “They used to take me downtown to the cancer center for treatment but we stopped doing that,” he says. “I refused treatment for tuberculosis last week, I’m dealing with another disease, my mouth is full of ulcers. I cannot eat. I look bad.”

Exotic says if he gets out of prison, he has a new calling.

“Listen, if I live through this because my health is deteriorating by the day … I’m gonna do nothing but go around the world and help the kids that have been born with cleft palates and fix their faces,” he says. “OperationSmile.org is one of my favorite charities that I am going to get behind and we’re going to turn this into something good.”