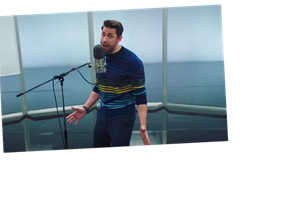 The Office fans were in for a treat with Saturday Night Live‘s first show of 2021. With John Krasinski as the host of the big midseason premiere, it was pretty much a given that there would be at least a few references to the beloved sitcom. Not only did Krasisnki’s opening monologue deliver some unexpected Jim and Pam romance, but the actor even put his own spin on the show’s theme song. John Krasinski singing The Office theme song on SNL gave the catchy ditty some lyrics for the first time, and the new version will definitely be stuck in your head after you hear it.

For his SNL hosting debut on Saturday, Jan. 30, Krasinski delivered a bunch of jokes for The Office fans. His monologue was hilariously derailed by various audience members calling him Jim and asking him where Pam was, as Pete Davidson joined him on stage to explain how everyone has been watching The Office on an endless loop during quarantine. After the crowd demanded Krasinski kiss Pam, Davidson offered to step in for his on-screen love interest, and the monologue ended with the two men locking lips.

Later in the show, Krasinski appeared as himself in a sketch about TV stars singing the theme songs to their own shows. After hilarious renditions on the themes from shows like The Queen’s Gambit, Bridgerton, and Sex and the City, Krasinski took the mic to finally give The Office theme the lyrics it deserves. TBH, it’ll probably be hard for fans not to sing Krasinski’s new lyrics next time the hit play on an episode of The Office. Check out his take on the song below.

Throughout 2020, The Office was a go-to show for several fans to rewatch thanks to its easy accessibility on Netflix. However, the NBC sitcom was pulled from Netflix’s library on the first day of 2021, and has since become exclusively available to stream on NBC’s new streaming platform, Peacock. The up-side of the move is that Peacock has been gifting fans with never-before-seen deleted scenes and behind-the-scenes content from the series, which ran from 2005 to 2013.

While The Office may be in his past, Krasinski has a ton of other buzzy projects he’s working on at the moment. The sequel to his hit horror flick A Quiet Place is slated to premiere this fall after multiple delays, and his Amazon Prime action series Jack Ryan was picked up for a third season. Krasinski also became a surprise star during the early days of the coronavirus pandemic by creating a feel-good web series called Some Good News, which he later sold to ViacomCBS to be developed into an upcoming series for CBS All Access.

Basically, you’ll be seeing a lot of Krasinski in 2021 even if you aren’t rewatching The Office for the millionth time, and now that he’s given fans this lyrical gift on SNL, you’ll probably hear his voice in your head every time that theme song starts playing from now on.