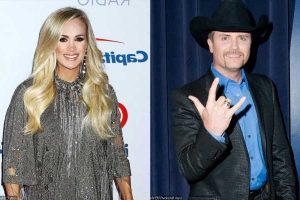 When defending the former ‘American Idol’ winner, the 47-year-old ‘Save a Horse’ crooner insists that his fellow country singer ‘can like whatever tweet she wants to like.’

AceShowbiz –John Rich has Carrie Underwood‘s back amid backlash over her recent action. Upon learning that his fellow country singer got dragged on Twitter for liking an anti-mask tweet, the “Save a Horse” crooner came to her defense by branding her a “tough” girl.

The 47-year-old voiced his support for the former “American Idol” winner via Twitter on Tuesday, August 17. “I say @carrieunderwood can like whatever tweet she wants to like. Who are ‘they’ to shout her down?” he began his message.

“Watch out, she’s a tough Okie gal:) You see what’s going on here? It’s ‘freedom of speech unless you disagree with the mob,’ ” the former Lonestar member went on. He then added hashtag, #CarrieTakeTheWheel,” referencing her song “Jesus Take the Wheel”. 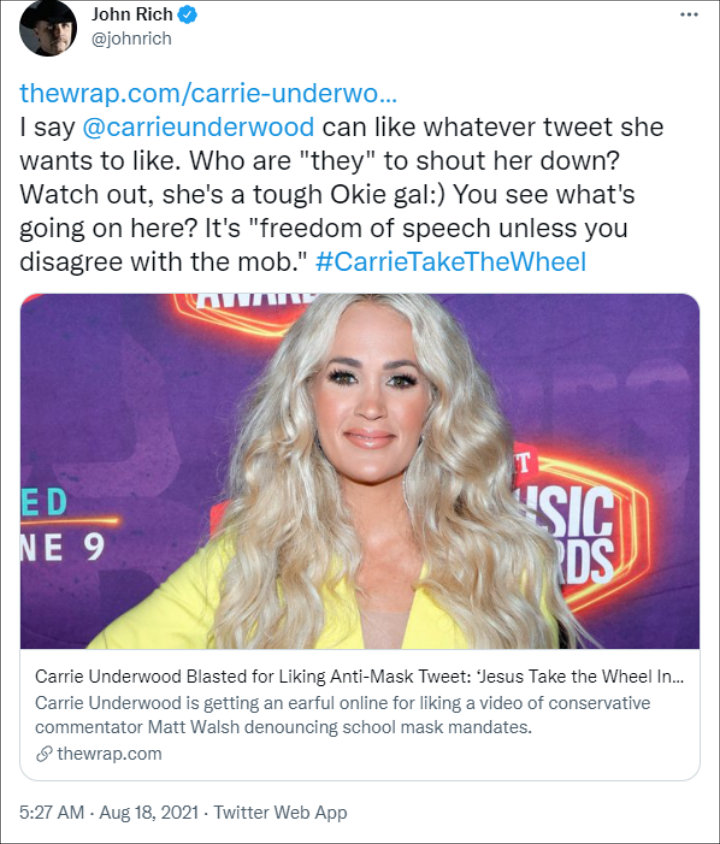 John Rich defended Carrie Underwood after she got attacked for liking an anti-mask tweet.

Carrie landed in hot water after she was caught liking an anti-mask tweet and a video from conservative commentator Matt Walsh, in which he argued against a mask mandate at a Nashville School Board meeting. In the clip, Matt claimed that COVID-19 poses “almost no threat to our kids at all” and that forcing kids to wear masks can be classified as “child abuse.”

Many have since slammed Carrie. “Your reminder that Carrie Underwood and Mike Fisher don’t give a s**t about the pandemic or how many people have died unnecessarily from it. Do better, @carrieunderwood, this is embarrassing and dangerous,” one person raged, before another added, “It’s a shame you would rather see kids die than have them wear a mask..”

While Carrie hasn’t responded to the criticism, Matt already addressed the situation by sarcastically tweeting, “Carrie Underwood liked my video and now the mob is coming for her. She should know better than to like something that they don’t like.” He further noted, “This is an unforgivable sin.”

“Like anyone else, I am upset and disturbed that Carrie Underwood liked one of my tweets,” Matt penned in a follow-up post. “She should know better than to indirectly endorse the opinions of an extremist and scoundrel such as myself. Her lack of judgment is appalling. I demand that she renounce me and apologize.”

Later on Wednesday, August 18, Billy Eichner revealed that he was blocked by Carrie on Twitter. After sharing the “ICONIC” screenshot, the actor/comedian clarified that he “didn’t even tweet about her anti-mask views yesterday [but] she had ALREADY blocked [him].” He then quipped, “I’m now taking a little Twitter break because honestly this is one of the proudest moments of my career and it will be hard to top. Love you all.”