Home » Celebrities » John Whaite on how Strictly has changed his life: ‘I can’t believe how much I get recognised’ 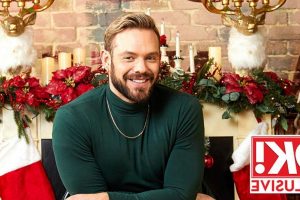 John Whaite may have won the Great British Bake Off in 2012, but his huge success on Strictly Come Dancing means he's recognised more than ever now.

The star, who is partnered with Johannes Radebe, making them the first ever same sex couple to compete on the show, says he's even worried about people recognising him while he's hungover – which happened recently as he sat down to have a burger at popular diner Five Guys.

When asked how he's handling the huge fame of Strictly, John told OK!: "I can’t believe how much more I’m getting recognised. I was in Five Guys the other day, really hungover and slouched over a burger, when these kids came up to me for a picture!"

But down to earth John, who was chatting to OK! as part of his role on Steph's Packed Lunch, says he's aware of how he needs to present himself in public now he's on Strictly.

"I thought ‘I’ve got to be careful’," he said. "I think people still appreciate vulnerability and I’ve always been quite honest and open with who I am – but perhaps hungover slumped over a burger on a Sunday morning is not a good look!"

Meanwhile John also discussed his Christmas plans, saying he can't wait to spend some quality time with his fiancé, Paul.

"We've booked a cabin in the middle of Scotland in a national park," he explained. "It’s just us and our dog. We’re not going to see any family or friends."

"With Strictly being so manic, we haven’t seen much of each other, so we’ve decided this Christmas we’re going to dedicate to each other.

"We’ll see our families before we go, but then we’ll have no phone signal or Wi-Fi. Just a fire, books and games of Uno!"

John also revealed his go-to Christmas movie. When questioned on his top festive film, he replied: "I start watching Christmas films in July. I’m not kidding! If I’m feeling a bit depressed, I watch one. My favourite is The Family Stone with Sarah Jessica Parker and Diane Keaton. It’s amazing."

For all the latest celebrity news and exclusive interviews, sign up to our daily newsletter here.