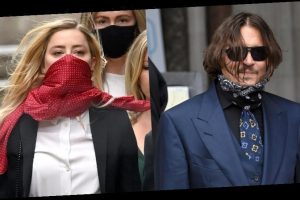 Johnny Depp and Amber Heard had another day in court on Thursday (July 9) as part of his libel trial in London, England.

The 57-year-old Pirates of the Caribbean actor is suing News Group Newspapers and Dan Wootton for calling him “a wife beater.” He denies he was violent towards his ex Amber.

One of the things brought up during the trial on Thursday was Johnny and Amber‘s trip to an island in the Bahamas in August 2014. It has been alleged that he attacked her during the trip while he was withdrawing from the prescription painkiller Roxicodone, which he denies.

Johnny said in his witness statement that Amber “often intervened and withheld medicine from me” while they were on the island and he called this “one of the cruelest things that she has ever done,” according to the Daily Mail.

Johnny told the court that he was left “sobbing like a child” on the floor with the “heebie-jeebies” after Amber denied him the medicine.

Text messages between Amber and Johnny‘s doctor and nurse were shown, in which she allegedly asked for help and said that he had pushed her.

Johnny said in court, “I can only say from my point of view I was in no physical condition to push anyone. I’m denying I pushed her. I’m going to suggest that the testimony is fabricated… I believe it’s part of the dossier that was an insurance policy for her.”

Another topic brought up in court on Thursday was how Johnny allegedly used the blood from his severed finger to paint messages on a mirror.

Also pictured inside: Amber holding hands with girlfriend Bianca Butti while arriving at the High Court.

END_OF_DOCUMENT_TOKEN_TO_BE_REPLACED

Kane Brown Reveals He ‘Gives Himself’ The ‘Best New Dad Advice’ For Daughter Kingsley, 9 Mos.: ‘I Learn As I Go’

END_OF_DOCUMENT_TOKEN_TO_BE_REPLACED

END_OF_DOCUMENT_TOKEN_TO_BE_REPLACED
We and our partners use cookies on this site to improve our service, perform analytics, personalize advertising, measure advertising performance, and remember website preferences.Ok