Home » Celebrities » JoJo Siwa and Kylie Prew Are Back Together 7 Months After Breaking Up!

JoJo Siwa and Kylie Prew Are Back Together 7 Months After Breaking Up! 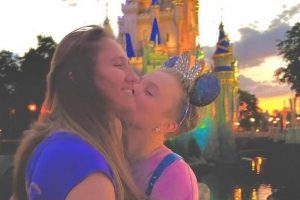 JoJo Siwa and Kylie Prew are officially back together! JoJo confirmed the news on Instagram, captioning some sweet photos of her and Kylie at Disneyland with “If you love something let it go, if it comes back….🤍♾.”

Though honestly, JoJo’s dad kinda dropped this news first when he posted pics of JoJo and Kylie at Disneyland four days ago:

Quick reminder: JoJoe and Kylie broke up in October 2021 after less than a year of dating. Their split took place while JoJo was filming Dancing with the Stars, and a source told Us Weekly at the time that “JoJo and Kylie did break up. Some cast are aware about the breakup. Kylie stopped attending the show, so she hasn’t been seen in the audience since they split. JoJo is focusing on the competition and giving her all. While it’s a rough time for her, she’s handling DWTS very professionally and still putting on a smile and giving 100 percent. She doesn’t want to let down her fans.”

JoJo later spoke about the split on Paris Hilton’s podcast, saying “I have yet to talk about this officially, publicly, but we broke up. But she is literally still my best friend. I talked to her yesterday, she just got a new puppy. She’s awesome. She’s having the time of her life, I’m having the time of my life. I’m really lucky that I didn’t lose her completely because, you know, even though relationships end, friendships don’t have to end.”

So happy these two found their way back together!