Home » Celebrities » JoJo Siwa Reveals She Has a Girlfriend

JoJo Siwa Reveals She Has a Girlfriend 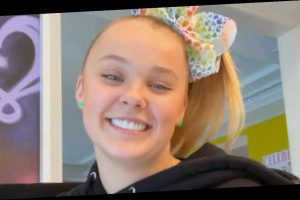 JoJo Siwa is in a relationship! The 17-year-old star revealed during her appearance on The Tonight Show Starring Jimmy Fallon on Wednesday that she has a girlfriend.

Siwa — who came out as a member of the LGBTQ+ community last month — didn’t reveal the identity of her partner, but called her “the most amazing, wonderful, perfect, most beautiful girlfriend in the whole world.” The Nickelodeon star also said her girlfriend was “super encouraging” in her decision to come out.

“I was doing TikTok with the people in the Pride House… and I’m like, ‘I think this TikTok is going to out me,'” Siwa said of the video posted on Jan. 23, which showed her dancing with the group to Paramore’s “Ain’t It Fun.” “I was like, ‘I don’t really mind, it is true. I do have the most amazing, wonderful, perfect, most beautiful girlfriend in the whole world. It’s not something I’m ashamed of, I just haven’t shown the internet yet.'”

Siwa said “all my friends and family” knew, but her girlfriend was especially influential in giving her the confidence to come out publicly.

“The day after I posted on TikTok, I was on FaceTime with her and we were talking about it, and talking about all of the love that came in and technically I still hadn’t confirmed it,” she recalled. “And I was like, I kind of want to post this picture [wearing a ‘Best Gay Cousin Ever’ shirt]… She was super encouraging like, ‘Do it!’ I was like, ‘Alright, I did it.'”

Siwa said that she knew coming out could be “a very scary thing,” but that she focused on the people she could help by sharing her truth.

“Even if there’s a million people that don’t accept it, there’s a hundred million that do,” she said. “Also, I don’t want it to be such a big thing. Like, what am I going to do? Have a coming out party? No, it’s just who I am.”

The pop star also said she’s “on the phone literally 24/7” with her girlfriend, and spoke with her in depth about how she could have “lost everything” after coming out.

“I was like, ‘Technically it was a really big risk posting that… but if I lost everything that I’ve created because of being myself and because of loving who I want to love I don’t want it, that’s not what,'” Siwa said on Wednesday. “If I can’t love who I want to love, that’s one of the most important things to me.”

“About 10 minutes before I came out to do this interview today, I was again on the phone with my girl and I started crying,” she added. “She’s like, ‘What’s wrong with you?’ I’m like, ‘I’m just so happy because now I get to share what makes me the happiest with the world, and it makes my heart so happy.'”

See more on Siwa in the video below.