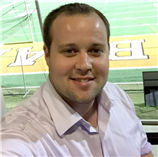 The notion of Josh Duggar as a good husband died a long time ago.

Nay, the notion of Josh Duggar has a good human being died a long time ago.

But Josh Duggar as an actual human being?

As someone living and breathing and walking the earth, despite having molested his own sisters and cheated on his wife and maybe downloaded child pornography?

It’s been safely assumed that this version of Josh Duggar still exists.

Which is to say: The creepy father of six is alive.

Or so we think, that is.

Late last week, a number of Internet users actually got the impression that Duggarr had passed away, falling prey to this sort of wild speculation due to the spreading of a meme that practicallly stated as much.

We’ve posted it below.

It was shared alongside Josh’s mug shot from his late April arrest.

And you can see why the rumor gained momentum around social media, can’t you?

In reality, as far as we know, Josh Duggar is very much alive — as much as many critics wish this weren’t the case because the guy is accused of watching footage of an 18-month old get sexually assaulted.

Every new detail that comes out about Duggar is more disgusting than the one before.

Following the latest update in regard to the father of six, TLC canceled Counting On last Tuesday, saying a very tame statement:

“TLC will not be producing additional seasons of Counting On. TLC feels it is important to give the Duggar family the opportunity to address their situation privately.”

Chances are, the strange, RIP-related meme that prompted folks to wonder about Duggar’s status was uploaded in response to this cancelation news.

Josh himself has not yet commented in public on either his arrest; the allegations that have been leveled against him; or the axing of this TLC spinoff.

Once again, NOT because he’s dead.

But because he’s under very strict orders to basically remain under the roof of court-appointed third-party custodians and has likely been advised by his attorrneys not to say a word.

Josh’s terrible parents, however, reacted to the Counting On news as follows last week:

“It is hard to believe that more than 17 years have passed since we were first contacted by a production company wanting to do a one-hour documentary about the logistics of raising 14 children.

“Our family has grown (and grown up!) before our eyes and on national television, and the journey has been miraculous — following God is an exciting adventure!

“Over the years, some of our most treasured moments have been those when we met children across the country who are alive today because of our testimony that children are a blessing — a special gift from God — and that the only real hope for individuals and families is a close relationship with Jesus Christ.”

Neither Jim Bob nor Michelle mentioned Josh in this statement.

But they sort of alluded to all their oldest child has put the family through.

“Since we began filming so long ago, we’ve had the amazing honor to share our lives, our faith, and our story with you—including some of the most difficult and painful moments our family has ever faced.

“We are full of deep gratitude for the love shown to us and the prayers of so many who have sustained us both now and through the years.”

We look forward to all the new adventures and endeavors that may come our way, and with so many grown children and wonderful grandchildren, we know our love will only continue to multiply!

We are forever grateful for our film crew and so many others behind the scenes who have become like family to us over the years.

The wonderful experiences that filming has provided us will be treasured always, and we look forward to discovering what’s next for our family and sharing more with you along the way!