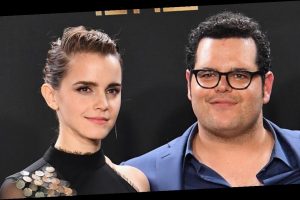 Josh Gad took to his Instagram account to praise Emma Watson, his Beauty & the Beast co-star, amid the viral stories about her.

If you don’t know, Seth Rogen recently was asked about a rumor that Emma Watson stormed off of the set of This is the End in 2013.

Seth originally said, “I mean, I don’t look back on that and think, ‘How dare she do that?’ You know? I think sometimes when you read something, when it comes to life it doesn’t seem to be what you thought it was. But it was not some terrible ending to our relationship.”

A few days later, Seth‘s quote created a whole lot of rumors and he took to Twitter to clarify, saying, “Emma Watson did not ‘storm off the set’ and it’s sh-tty that the perception is that she did.”

Josh felt the need to take to his social media to clarify what kind of person Emma really is.

“Pure love. @emmawatson is a legend and an amazing human being. Not that it needed saying but…well…she is,” Josh posted.