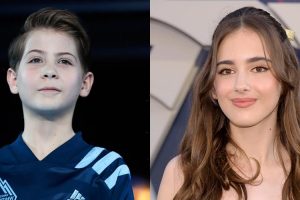 Julia Butters and Jacob Tremblay will be playing twin siblings!

The young stars have been cast in the upcoming folk horror film Queen of Bones, which is starting production in Canada, Deadline reveals.

Also cast in the film are Martin Freeman as their father and Taylor Schilling as his friend.

Find out what it’s about inside…

The upcoming movie follows “twin siblings Lily (Butters) and Sam (Tremblay) who live at a remote homestead with their widowed father, Malcolm (Freeman), a violinmaker in 1931 Oregon. When Lily and Sam find an Icelandic spell book in the cellar, they begin to suspect a connection between their mother’s death and dark forces in the woods. They then embark on a dangerous mission to force their father and his friend, Ida May (Schilling), to reveal the truth.”

Robert Budreau is directing, with a script by Michael Burgner.

“I am thrilled to be working with such a stellar cast to bring this amazing Depression-era folk horror script to life,” Robert said in a statement. “And I’m equally excited to be collaborating with Appian Way and my past partners at Productivity Media.”

While Julia recently starred in the Netflix film The Gray Man, Jacob has two big upcoming projects – The Little Mermaid and Toxic Avenger!