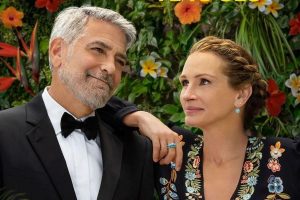 The ‘Erin Brockovich’ star has always believed that ‘lots of making out’ is an important factor in a successful marriage and her ‘Ticket to Paradise’ co-star agrees.

AceShowbiz –Julia Roberts claims the key to a happy marriage is “lots of making out.” The 54-year-old star – who has been married to cinematographer Daniel Moder since 2002 and has 17-year-old twins Phinnaeus and Hazel as well as son Henry, 15, with him – is sticking to her guns as she “always says the same thing” about marriage.

“I always say that same thing and I’m sticking with it. It’s making out. Lots of making out,” she said when asked what makes a marriage successful.

The “Pretty Woman” actress took a break from making movies in 2018 before returning to the screen in “Ticket to Paradise” opposite George Clooney earlier this year and her co-star – who tied the knot with human rights lawyer Amal, 44, in 2014 and went on to have twins Alexander and Ella, five, with her – joked that he makes out with her husband too.

In the joint interview, he told E! Online, “Well, that’s a good one. I will say that. I make out with Danny, too.” Julia replied, “It keeps you guys together!”

Meanwhile, the “Erin Brockovich” actress recently admitted that while her career in showbusiness has been a “dream come true,” it is her domestic life that brings her a lot of “joy.”

She continued about her dream come true, “The life that we’ve built with our children. That’s the best stuff. To come home at the end of the day, triumphantly to them. When I’m not working, that is my full-time job. And it isn’t rainbows and kittens every day, but it does bring me a lot of joy.”